"The CHALLENGER's Sickbay is rather unique in that the Sickbay facility is two decks with an open center area. It resembles engineering in that there is a center shaft for elevators and ladders, where the Warp Core might normally be placed were it in engineering. The two decks for Sickbay host a range of Triage, surgical bays, access to limited Science labs for bio hazard and burn units, maturnity ward and birthing room, etc. The open environment helps to deal with clausterphobia, etc. Because the Akira Class is a warship, the double decker helps when large amounts of wounded come in." -Captain T'Pen

Another difference that sets the Challenger's Sickbay apart from all other sickbays in Starfleet, is that Doctor Toni Turner was granted a request to Starfleet Medical to have a stand alone Emergency Medical Computer Core installed so that should the main computer core have to be ejected or become compromised, the work in Sickbay and its labs would continue without interruption.-LtCmdr Toni Turner

Sickbay's Triage area is on Deck 3. It has a full compliment of Nurses as well as extra operating rooms. The Dentist office is also located just off the Triage Area.

Sitting in her seat, she noticed the EMHv4, Dr. Fimpel, fidget in his seat. He looked nothing like the former EMH programs that Starfleet had used. This man was an absolute neurotic mess. T'Pen couldn't understand why Fleet hadn't placed a real Doctor aboard the ship, but until they did Fimpel would be the token Doctor.

T'Pen: Anything amiss Dr.? Fimpel, whispering so that most of the other officers wouldn't hear him, "Warp Factor 8 Captain? Right out of dock? She's a new ship, but do you really intend for her to splatter us all across the forward bulkhead if she looses integrity?"

She stood up and walked over to where he was sitting and leaned over.

Dr. Fimpel: "I sit corrected, Captain. I regret my comments."

T'Pen: "Apology accepted." She turned around and breathed a calming sigh.

EMHv2: Dr. Beverly Crusher at your service. What do you need of me, Doctor?

Toni appraised the woman standing in front of her. She was a tall thin Terran, and resembled the old Earth stereotype of a no-nonsense Librarian with her hair pulled back, making a bun at the nape of her neck, and wire-rimmed eyeglasses sitting on the end of her nose. ::

Turner: Dr. Crusher pull up all the data you have on Iresine Syndrome and Klingons, and attend Dr. To’rbls’ every need exclusively. If you note any change, no matter how slight, I want you to let me know right away. Understood?

Crusher: Yes, Doctor, I will see he has the best care possible.

Pursuant to Starfleet General Policy and Starfleet Medical Emergency Operations, at least 40% of the officers and crew of the Akira class are cross-trained to serve as Emergency Medical Technicians, to serve as triage specialists, medics, and other emergency medical functions along with non-medical emergency operations in engineering or tactical departments. This set of policies was established due to the wide variety of emergencies, both medical and otherwise, that a Federation Starship could respond to on any given mission.

The observation lounge on deck A along with the VIP/guest quarters on deck B can serve as emergency intensive care wards, with an estimated online timeframe of 30 minutes with maximum engineering support. Further, the primary flight deck has 5 mobile hospitals that can be deployed either on the flight deck, or transported to Cargo Bay 2 or 3 for emergency overflow triage centers. Cargo Bay 3 also provides for the emergency atmosphere recalibration to type H,K, or L environments, intended for non-humanoid casualties. All facilities are equipped with full Bio-hazard suites, to minimize and prevent crew exposure to potentially deadly diseases. 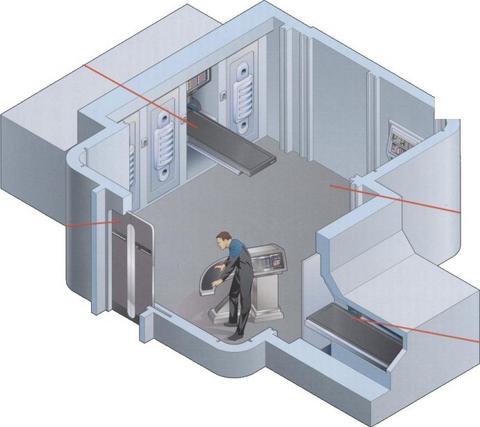 The officer in charge of this performs autopies in investigations and works closely with the Security and Medical Departments.

The Morgue has all the equipment necessary to perform Autopies and refrigeration chambers for storage.

The picture below shows the lab portion of the Morgue. 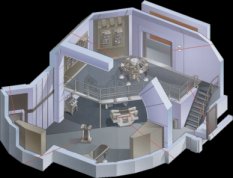 The Emergency Field Unit works behind the lines of the ground troops, where triage and stabilization happens before taken abroad the medship on an dustoff, (evac of casualty) from an LZ (landing zone) perimeter to the medship (where meatball surgery is performed) this is surgery that helps to stabilize the casualty until we can either beam them directly to sickbay, where further surgical procedures can be done by specialist surgeons.