'Lieutenant Maddi "Madds" Hyden is currently serving as the Chief of Security aboard the USS Atlantis. She is a shy individual until she knows the individual. She loves a challenge especially in sparring or fighting in general.

Scar on neck descending to chest caused by D'K Tagh.
Scar under her right hairline caused by Bat'leth.
Phoenix Tattoo covering most of her back.

The two met in their first year at the Academy. The shyness that Maddi had was soon quenched by her instant liking of Esa. They exchanged classes on a few different occasions in their time at the Academy, but Esa came to Maddi for tutoring in multiple classes. On their trip to Deep Space 26, they established they would stick together no matter what happened, a friendship that would last a lifetime. Both being assigned to the USS Atlantis was a shock, but a welcome one, as it meant they were stationed together. They hoped to make a difference on the ship together. After an explosion in the Computer Core of the Atlantis, Esa and Maddi revealed they had feelings for one another. The relationship had turned into more and Maddi was excited for the future with the one person she cared about more than anything. The friendship finally became absolute when Maddi asked Esa to marry her. She is now married to her best friend.

Kayla and Maddi bonded in a way most would never imagine. A sparring match that neither of them would ever forget. After that match the two of them became inseprable friends. In the years after, though their relationship was distant they always seemed to contact each other when it mattered most. No one else would or could have been Maddi's Maid of Honor it was an honor only Kayla deserved. She had been with Maddi through everything and for that Maddi would always consider her the closest friend she had.

The relationship between Jo and Madds started quite unexpectedly they stumbled upon each other in the Academy where Maddi came to see how bad Jo was at hand to hand combat. She suggested training Jo and Jo jumped at the opportunity after she saw Maddi in action. After many sessions where Jo got her butt handed to her many times, she started to improve and Maddi begin to teach her more and more. As Jo was a fourth year Cadet she left before Maddi could finish her training. They became good friends, but lost contact, as Jo's duties kept her from contacting her. They recently reconnected with Maddi excited to start teaching her again and talking to her friend.

Maddi was born in the small town of Glencoe Scotland nestled high in the Scottish Highlands part of Old Britain of Earth from a young age her parents seemed to keep her hidden away from the world. She was their hidden treasure. She never understood why they kept her hidden because her older sister was allowed to go everywhere and they didn’t care. She was left at home alone quite often though she didn't mind the Hyden Residence was a castle that was a marvel of the town. She had a rough childhood one that she kept hidden from everyone, in fact, she has told no one of the personal trauma she has received. The memories that plague her still bother her from time to time. In this time she became very proficient in combat with the Klingon Bat'Leth and D'K Tagh.

The hobbies Maddi picked up were not those typical of a girl her age she became proficient in many different types of Martial Arts, it was one of the things that helped her get through the loneliness of being alone. She became bombarded with request for her to join tournaments and train classes. She agreed and became Team Captain of a group that became one of the most popular in all of the Islands around. Her training was recognized by (BMABA) and she was honored by their highest award.

When Maddi was slightly older her father took her on a trip to see a Starfleet ship he was working on the ship was highly classified the Prometheus class as her father was one of the head Warp Core Theorist in Starfleet his opinion was one Starfleet Command valued. Maddi was overwhelmed when she stepped on the ship there was so much to see and as her father began to show her everything it made her realize she wanted to serve on a Starfleet vessel. The ship was a milestone in Federation Technology and it astounded Maddi at just how much technology was apart of her father's job, in fact, from that day on her relationship with her Father was closer then she had ever expected it to be. The sleek designs of the ship were burned into her memory and because of it, the goal in her mind would become a reality.

As she continued to grow up she learned how to speak English perfectly with no Gallic words, but the accent which she didn’t mind it reminded her of who she was. She researched every ship and station on every Starfleet ship, but she seemed to prefer Security it was her dream to be the head of security and tactical on a ship and maybe eventually a part of a command. A big goal, but one her family was beyond proud of her for even her sister who was part of Temporal Operations in Starfleet so Maddi knew very little of her sister's job, but she was proud of her and loved her more than anything.

The biggest regret Maddi had was not spending time with her mother more, though Maddi loved her mother her relationship with her was strained due to her mother traveling frequently composing for many orchestras all over Earth and beyond. The time Maddi spent with her mom was always short or tense because Maddi wished just once her mother would have invited her to one of her performances. Maddi was overwhelmed with grief when her mother died just as she had begun to study for her Academy entrance exam, as the hate had been built up for so long it was torn down by the overwhelming grief and love Maddi had for her mother.

She studied hard for the Academy entrance exam and passed it being in the top 4% of the class. It was different to be apart of a civilized environment, but she was so happy about the change and her dad was proud of her something she strived for.

During her time in the Academy, she took as many classes as she was permitted it wasn't normal, but in her time there she was asked to help instruct hand to hand combat. Her main classes were Security and Tactical, but through hard work and much dedication she finished the Academy with 2 Majors and 2 Minors an achievement even she was proud of.

She was commissioned to the USS Atlantis on Stardate 239511.20 and became one of the ships Security Officers. As she arrived during shore leave she hasn't completed a mission, but she is currently in a mission.

Maddi's time on the USS Atlantis had been full of adventure. Her first mission got her injured right off. She was in the computer core and an unknown device exploded slamming her against the wall injuring her. The mission proved to be the most trying of her time on the Atlantis. The Captain had been kidnapped by the Consortium. 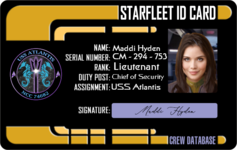