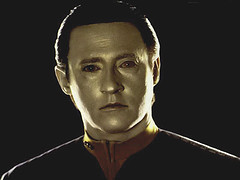 Chip was discovered by an away team in late 2379, on Barisa Prime. Captain Jamila Edmond of the USS Magellan sent the disassembled android to Starfleet Command. They brought in Geordi La Forge, to help assess Chip’s condition. After he was reassembled, he was reactivated. He did not have memory of how he got on Barisa Prime. After he was activated he had many glitches, it appeared that he was created soon after Noonien Soong left the colony of Omicron Theta. From what Chip can recall he was deactivated by Soong. How he ended up on Barisa Prime is still a mystery. Starfleet Command decided to allow him to enter Starfleet Academy based on the success of Lt. Commander Data. Chip excelled in the academy, being able to process things at great speed. Although he does not have emotions, one of his flaws is he can be viewed as rude. Another flaw is that Chip, unlike Data, does not aspire to be more human. He accepts his role as an android and strives to improve his programming instead of his feelings.

In the six months he was been out of the Academy, he has been assigned to six starships, one embassy, and three starbases. He has problems integrating into crews. They look down on him because he is an android, and he looks down on them for beliefs that he is superior.