Vitor was born on the 5 April 2362, in Lisbon. His parents were both Starfleet Officer from Portuguese ancestry, although his mother never really cared about the family background, which explained her anglicized name.

On his father's side there was a bit more attention to that, family tradition of Starfleet service was so embedded on the Tito’s that his father and aunt entered the Academy to perpetuate that lineage.

It was at the Academy that his parents meet and although they began serving on different ships they managed to keep up the relation that lead to their marriage two years before Vitor was born.

For a brief period they were both stationed on Earth, but in 2365 they were assigned to the USS Bellerophon, Mary in Security and José in Engineering. In 2367 the Bellerophon was part of the fleet that faced the Borg in Wolf 359. José and Vitor managed to survive as they evacuated in an escape pod but his mother was one of the casualties in that day.

Vitor has very few recollections of those days, but to this day he can’t stand smoke or the smell of something burning. Now a widow with a small boy on his care José was transferred to the Utopia Planitia Fleet Yards and Vitor spent his time between Mars and his grandfather home in Lisbon.

Also a widow Roberto Tito was a Starfleet Antrophologist and he was a close friend of Jonas Silveira. It was usual for Vitor to go with his grandfather to the Silveira’s farmhouse.

There he meet Vitor Silveira, and in spite of the age difference the two boys become close friends with Tito always looking out for the younger Silveira.

By 2370’s Vitor’s world was shaken again. Although not an everyday presence, it was by that year that his aunt become a Maquis. The rift between her and Vitor’s father and grandfather was clear, although they kept seeing each other for Vitor’s sake. Being the only female reference to him Vitor adored his aunt. To this day she is listed as missing, although presumed dead.

Worse was his father's transfer. José was transferred to the USS Venture due to his specialty in damage control. He served during the Dominion War, and returned to his old posting in 2376.

But the war changed him and even with continuous Counseling, José never recovered from the traumas. In 2379 an accident with a plasma venting system injured José seriously and although the Doctors made all the possible attempts he never recovered and died.

It was never confirmed, but Vitor still thinks that there was no accident and that his father killed himself.

Now 17 living with an aging grandparent Vitor decided to cut of with the past and tried to enter a civilian University instead of entering the Academy. He had excellent grades in math and chemistry, and considered following those, but when his grandfather's health deteriorating he eventually conceded to the old man's arm twitching and entered Starfleet Academy in 2380.

In a gesture of defiance he made a tattoo on his left arm, the word tradição (tradition) with each letter on the rings of a chain that goes from his shoulder to his elbow.

He also majored in Security instead of following Science as his grandfather expected.

Vitor graduated in 2384 and his first assignment was the Renaissance class USS Aries (NCC-45167) as Security Officer. It was a rather quiet period and Vitor adjusted himself very quickly to the routine. The fact that most of the first year was spent on scientific surveys didn’t bothered him and it was usual for him to stick around the Science labs and give a hand when needed. In early 2386 his grandfather died. Vitor took a few months of leave to take care of things and requested a transfer.

Assigned to patrolling along the Klingon border it had more than it’s share of incidents, fights and problems. Between blood feuds, remnants of the Orion Syndicate and the usual power struggles, the old adagio of “being careful for what you wish for” was proven true. During that year the Adelaide battle a total of 12 ships, and although Tactical wasn’t his first choosing Vitor managed to prove himself a good officer being promoted to Lieutenant Junior grade in 2387.

In the aftermath of the Hobus explosion the Adelaide was assigned to provide aid and assistance. The Adelaide was then ordered to retrieve a group of Romulan Senators, and in what revealed to be an ambush the away team was attacked. Just Vitor and the First Officer survived, and the Adelaide had to fight their way out of there.

Using the Multi vector attack, Vitor took command of the dorsal section and was instrumental in destroying a Romulan D'deridex.

For his actions Vitor was promoted to Lieutenant, and with it he was assigned Chief of Security and Second Officer. With a new Captain, and now under a classified mission deep in what was once Romulan space the Adelaide was ordered to destroy a Tal Shiar base where they were developing a Borg based weapon that could threaten the Federation.

This mission was a success. It is still classified but Vitor led one of the away teams and retrieved the data on the Romulan weapon before destroying the base. But the mission was costly. Both the Captain and First Officer died leaving Vitor to command the Adelaide on a fighting retreat back to Federation space. Blaming himself for the losses Vitor decided to destroy the research data instead of bring it back and although he was promoted to Lieutenant Commander and offered the position of First Officer of the Adelaide he chose not to stay on board and asked for a transfer.

He was assigned as Chief Tactical Officer to the Intrepid class USS Stargazer (NCC-74655) as they were about to embark on their first mission. The Stargazer was to escort a Cardassian convoy, although in truth their mission was to serve as decoy for a Cardassian terrorist group that was attacking Federation and Cardassian targets.

The mission end up in more complicated than they expected. There was an infiltrator already on board and only the crews quick action allowed them to survive.

Vitor was injured seriously as he followed the saboteur, and had to spent a few days on Sickbay before finally returning to duty. It was there that he meet Vetras, the Stargazer Cairn Operations officer. Although he had a few “colorful friends” Vitor and Vetras really clicked and for the first time he fell in love.

After the repairs they were assigned to patrol duty. It was then that they found Kemocite on of the planets in their area. As the Stargazer went into orbit they also discovered that they weren't alone. Vitor joined the away team The natives were still in a pre-warp stage, but they had been dealing with Ferengi traders. The planets cave systems permitted the evolution of a reptilian like species. As the away team survived a cave in, they were taken by natives, but the situation was solved when the Ferengi trader offered his aid and spoke in their behalf.

Then the Stargazer was sent after the saboteur and terrorist group that they confronted on their first mission. During a reconnaissance flight Vetras was taken hostage by them and Vitor went down with the assault team to recover her.

By then they were already a couple and her near loss shook Vitor badly. Although with heavy casualties and the destruction of the Stargazer in the space battle, the assault on the terrorist base allowed Vitor to save Vetras.

After that both of them went on to the USS Lexington (NCC-61832) who join the task force ordered to secure the Trinity sector in what was known as the Klingon Invasion of 2389. Following Vitor’s suggestion the Captain volunteered the Lexington for a mission behind Klingon lines. Following swift attacks and retreats the Lexington managed to create havoc among the klingons and returned safely to Federation lines as the conflict unfolded.

With his commendable service Vitor become the Lexington’s First Officer afterwards and in early 2390 he and Vetras were married. The young couple enjoyed their time together as the Lexington was in dry dock repairing from battle damage for over four months. When it returned to duty it took on a milk run missions. By the end of the year they discovered Vetras was pregnant and although being a risk pregnancy she and Vitor stayed on board.

A decision that he regrets to this day. Vetras died during a survey mission in the Betreka Nebula. Due to radiation poisoning while she was in labor she miscarriage and died. That crushed Vitor. He left the Lexington and took a leave of absence. He began to drink, trying to drown his pain and start a self destructive path that involved bar fights and drug abuse. It was his friend Silveira who managed to help him get back to his feet.

Before being reassigned he went on mandatory Counseling for a few months and was stationed in Starfleet Headquarters for a “desk” job in the Quartermaster's service.

On the Columbia he found his "brother" Sil in a coma, after he was attacked by an Iconian. But he also meet Doc Jo MacLaren whit whom he become involved. They transferred together to the Apollo A, but their relationship eventually ended, as he was fearful of fully committing himself again. He left the Fleet trying to find another purpose in his life, but managed to stay out of the abyss he had fallen before.

That eventually led him back to Starfleet. With nothing and no one else to relate he thought that at least he could do something he enjoyed once.

Tito is usually stern, quiet and mostly antisocial. He can be rude and speaks his mind without asking permission. However he is a dedicated officer, although his interactions with others might bring trouble, and works diligently for the safety of the ship and crew he is with. 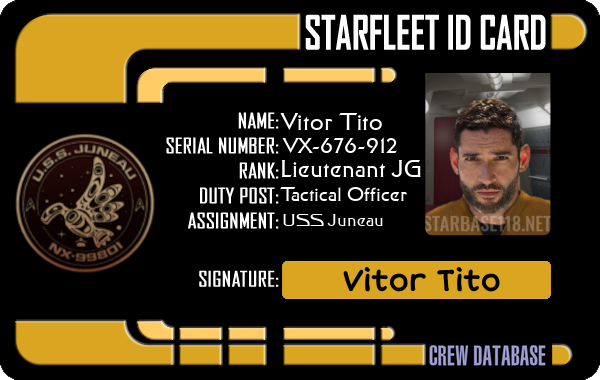 Tito arrived at the Junaeu during shore leave. His first contact's with the crew went as expected, except in regard with Counselor Arys. There appeared to be a rapport between them, but it didn't lasted.

Their diplomatic mission turned out well as they manage to conduct the peace process between the Caglan and the Zik, in spite of the tedious work that it was. Meanwhile Tito got closer to Arys as he found it easy to open up with her.

Now the Juneau is on patrol duty in the nebula DE-678912 - dubbed the Dirty Elbow Nebulae by the locals - after receiving a distress call from an old Cardassian listening post, claiming Nauscican pirates are targeting transport vessels in one of the most prominent trading routes in the Aavaro Wilds.