Tri'lea Polgonz is a Betazoid Daughter Ascendant of the Twentieth House of Betazed who regularly visits Amity Outpost, as she is involved in Betazed's efforts to establish colonies in the Delta Quadrant. Tri'lea is simmed by Keegan (Kivik).

Tri'lea, who goes by "Lea" among friends, is the daughter of Idrustix Doyoxo Polgonz and Ucron Dro - prominent members of the House of Travelers. Her mother served as a Daughter of the Twentieth House for decades until her recent passing, at which point Lea's father, Ucron, was granted the temporary title of Son. A stipulation of Idrustix's will indicates that for Tri'lea to ascend to her proper inherited role as Daughter, she must complete an arranged marriage with Ceciri Ariadust.

Her mother, one of the more distant Daughters of the Twentieth House, was nonetheless a staunch supporter of the current Head of the House (Seri ma'Soar)'s mission of rigorous expansion. As such, when it was announced that the Federation would be making inroads to the Delta Quadrant, it was only natural that she would take interest. Tri'lea has now inherited her mother's mission to establish colony worlds in the Delta Quadrant, with the first planet earmarked for settlement dubbed (by her Father), Idrustix, in honour of her late mother.

While she was born on Betazed, she has spent most of her life aboard starships - particularly her family's vessel, the Royal Betazed Yacht (RBY) Wanderlust - travelling from colony to colony. As such, she prefers the comfort of spacefaring vessels and stations and often gets uncomfortable during extended stays planet side, feeling 'trapped.'

Former Daughter of the Twentieth House, Idrustix was a cunning and intimidating figure, despite her warm and friendly demeanor. A staunch supporter of the House of Traveler's mission of expansion, Idrustix believed in restoring the glory of Betazed and its Noble Houses following the devastation of the Dominion War. Together with her husband, Ucron, she oversaw the establishment of several new colony worlds in her time.

A shrewd political player, Idtrustix also leapt at opportunities to strengthen her House's position within the political sphere of Betazoid Noble affairs. In her Last Will & Testament, she established that her daughter, Tri'lea, must marry Ceciri k'Ariadust in order to attain her proper role as 'Daughter of the Twentieth House' in a bid to arrange a beneficial union.

Ucron grew up in a connected, if not noble, household. Once considered too 'unserious' by his intended, he was motivated to study planetary engineering. Before long, he was deemed ‘respectable enough’ and the two were married. At age thirty, Ucron enlisted in the Betazed Planetary Guard, as the threat of the Dominion loomed over the Federation.

These days, Ucron is as happy to socialize with dignitaries at ambassadorial dinners as he is to relax and have a casual drink with friends. He enjoys sports, food, drinks, and music in his spare time – with his work focused on engineering projects, diplomacy, and maintaining a disciplined mind and body.

While he misses his wife dearly, he continues her work as a (temporary) Son of the Twentieth House, until Tri’lea is able to claim her rightful place. Ucron is fiercely supportive of his daughter and the House in general and truly believes in the importance of their continuing mission.

Tri'lea's Second Cousin, once removed (her mother's uncle's daughter) - colloquially referred to as 'Aunt Lohani' - is a Daughter of the Sixth House of Betazed (The House of Heart and Life).

Her mother is Keastre Vananth and her father is Neeli Vananth-Polgonz (nee Polgonz). She is married to Lwustrode Vananth (nee Orai). While she is a Daughter of the Sixth House, she also has familial ties to the Fifth House of Betazed as well as the Twentieth House of Betazed.

Lohani is a firm believer in the Sixth House's prerogative - that hearty and vivacious enjoyment of life is the key to keeping the tholtren (the spirit) of Betazed alive and well. The Sixth House is deeply involved in the landscape of political gossip and tabloids on Betazed and is often associated with scandal - though they are rarely at the center of it themselves.

Polgonz: Don’t let the purple carpet fool you. I’m not afraid to get my hands a little dirty in service to good relations.

- Legacy of a Matriarch

Tri’lea sat back and crossed her arms, but maintained a teasing smile.

Polgonz: I believe you were about to tell me what exactly it is about my mother’s dying wishes that you object to.

There was a moment of silence before Wil finally responded.

Polgonz: I don’t want to withhold from you. That’s simply not the Betazoid way of doing things. The truth is, I’m angry as well. What my mother did – keeping this plan from me – was dishonest. No matter how things resolve between us, both of us have been used in this arrangement, and that’s sure to leave a sour taste for some time to come.

Ceciri nodded, listening as she continued.

Polgonz: When I first came to Amity, I felt much more selfishly about this than I do now. My concern was for my family, my title… But I’ve had some time to think and, more importantly, to begin to see you as the complex and striking person that you are, rather than as a hoop to jump through. I want you to know that, whatever your decision, I intend to live by it.

Polgonz: Since I arrived on this station I have done little else but sabotage myself and the plans that my mother set in motion for me. I’ve felt angry, manipulated, and trapped – so I have tried to ruin everything in hopes of finding a way out… I’m so very sorry. I’ve treated you like a means to an end and that is extraordinarily wrong of me. 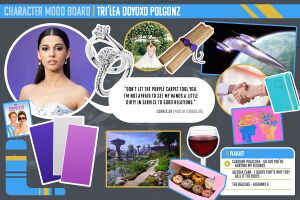 A 'Mood Board' featuring elements that represent Tri'lea's history, interests, and personality.

Below are a selection of music tracks that convey elements of Tri'lea's personality, storylines, and moods.