From 118Wiki
(Redirected from Walker, Tobias)
Jump to navigation Jump to search

Chief Warrant Officer Tobias Walker, a human, is currently a Research Engineer about the USS Mercury.

Born on New Vega mining colony, Tobias spent his life growing up moving from starship to starship while mining asteroids for rare materials. When Tobias turned 18 he joined his father in the asteroid mining business. Spent 3 years as a Heavy equipment operator and Material handler before moving into maintenance.

2 years into his role as heavy equipment operator, Tobias was involved in a serious mining accident that left him stranded in an EVA suit inside a collapsed asteroid for almost 20 hours. Several miners were killed during the event. Suspicions pointed towards the Orion Syndicate, but no concrete proof ever appeared.

While on a classified mining operation on the planet marked on the star charts only as AM-731, his mining team came under attack from a squad of Jem'Hadar forces. Marines from the USS Charleston were sent as an escort and were engaged in heavy fighting. Tobias would meet and assist Hannibal Parker, a marine, during much of the fighting. 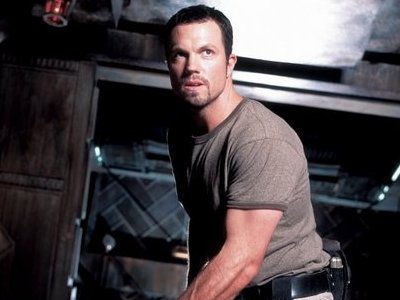 Tobias during the Battle of AM-731

On 238311.30 while on board a starfleet transport on route home, the ship suffered engine troubles, Tobias assisted the crew in making repairs. The captain recommended Tobias join the Academy. After 4 years on 238803.21, Tobias graduated with a major in engineering and a minor in helm/ops and reported for his first duty posting.

While on his first mission, Tobias nearly died while making emergency repairs to the deflector controls EPS conduits, directing the power flow away from damaged portions of the ship. Was revived by Security Chief Martinez. Tobias then grew to become a respected member of the crew, using his maintenance expertise to keep the Challenger as close to perfect working order as was possible.

During the shore leave following the mission to the Xarantine home world, Tobias was contacted by his 'watcher' Jubal Early and given an ultimatum, return to his former smuggling duties for the Orion Syndicate or have his past reviled to his captain. Tobias refused to be blackmailed and his past quickly became common knowledge. Lt. Parker in a fit of rage over what he believed to be Tobias's involvement in his parents death resulted in an incident in main engineering that resulting in Tobias nearly being choked to death by the massive security officer.

Both men would quickly develop an understanding that they needed with the other offered if they were to have any chance at revenge for what they had suffered from the Syndicate.

The Challenger was quickly tasked with finding a Bajoran vessel suspected of carrying a stolen thalaron weapon to be used on Star Base 118. The crew was quickly devised a plan and boarded the vessel preventing major catastrophe. But immediately after the mission, the crew would be merged with the crew of the USS Constitution aboard the freshly recommissioned USS Ronin. Captain Tel-ar, Tobias's first captain would be reassigned to Star Base 118.

Tobias then received the promotion to Lieutenant Junior Grade and was made acting Chief Engineer aboard the Ronin, by his new CO, Cmdr Tallis Rhul. During that mission, Tobias boarded an Orion shipyard complex and assisted in uploading a computer virus into the main computer core, shutting down the shipyard. The team he was a part of discovered a stolen Defiant Class vessel, The USS Avenger and hatched a daring rescue mission to steal it back from the hands of the Orion Syndicate and the Scarlett Brotherhood.

After this mission, Tobias was promoted to the position of Chief Engineer and given command of the engine room.

The Ronin was then tasked with assisting the Camarian Delegation with studying a solar eruption known as the Prominence of Peace. The scientific study quickly turned into a rescue mission as the flare was several orders of magnitude larger than expected. Tobias beamed over to the Camarian Observatory to assist in the rescue operation where he suffered flash backs to the incident at the AM-731 mining outpost, After stunning the Prime Minister, he returned to the Ronin.

Tobias has now transferred to the engine room of a new Oracle class vessel, the USS Mercury. After a brief settling in period, Tobias had put his mining skills back int he foreground with the discovery of a Dilithium rich asteroid in the middle of the Menthar Corridor. Strange flash backs to the battle of AM-731 led to a downward spiral in Tobias that left him dependent on stimulants to allow him to function due to his inability to sleep to prevent traumatic nightmares. These flashbacks were caused by an alien life form on the mining asteroid, left behind as a guardian of sort. Even after the mission had completed, he would still have nightmares when he closed his eyes.

His next mission found him on the Menthar Anchorage, a run down trading outpost in the middle of the corridor, when a plague broke out among the crew and station inhabitants. The only way that Tobias was able to function was the use of his stimulant hypo, ultimately resulting in his collapse and then immediate transfer to sickbay. The medical department quickly found the cause of his collapse and he began detox to clear out his system.

After being released from sickbay. he returned to his quarters to receive a threatening message from Tolan about returning to the Syndicate, and upon choosing to remain in starfleet, he was contacted by his parents to inform him that his brother was involved in a serious mining accident. An accident rigged by Tolan himself. Tobias then contemplated suicide.

Halfway through 2389, Tobias petitioned to join the SCE, and was accepted into the ranks as a Chief Warrant Officer, and stepped down from the role of chief engineer and took up shop as the resident research engineer.

Between a Rock and a ?: The USS Challenger was tasked with finding a solution to a conflict between the Klingon Empire and a unknown race known as the Xarantine. The Klingon Empire had quarantined the Xarantine to use them as target practice. After investigation the crew discovered that a third party had been interfering with the Xarantine, and attempted to destroy the Challenger to cover their role.

Hanging in the Balance:The USS Challenger fell in pursuit of the Scarlett Brotherhood freighter Pah Shar. Intelligence Reports reviled that the freighter was carrying a Tholoran weapon.

Where Eagles Dare:The USS Ronin was tasked with destroying a Orion Syndicate Shipyard. During the away mission, Tobias was contacted by his former boss, Tolan Greer and offer a choice to surrender or watch his away team members die. Tobias then helped the second way team commandeer a stolen Defiant class vessel, the USS Avenger and using the ships secondary war head, remove a major section of the shipyard in a desperate attack.

Suns of Anarchy:The Ronin was tasked with assisting the Camarans with the observations of a once every 1000 year solar event known as the Prominence of Peace, The event was magnitudes larger than expected and the event went from a simple observation to a risky search and rescue mission.

Ghosteroid:Led a mining expedition onto a dilithium rich asteroid, when the crew started having hallucinations and flashbacks of various traumatic experiences, finally leading the crew to discover that an alien life form was protecting the asteroid from outsiders.

Hazardous Duty Engineer: Tobias was accepted into the academy program to train engineers for missions that would involve dangerous locations or to work in environments that were outside the normal for a starship. Extreme heat, cold, toxic chemicals, hard vacuum, these are all the places that engineers could be called to action. Few are accepted into the program and fewer complete the course, but after years of mining in locations ranging from a airless asteroid to hellish landscapes of alien worlds, Tobias was able to finish and earn the honors of HDE next to his name.

Cargo Handling / Heavy Equipment Operator: Tobias holds both civilian and Star fleet certifications for cargo handling of both hazardous and non hazardous cargo. He is a qualified work bee pilot and it certified for operations up to 100 tons in 0 to 1.5g loading environments. He is also qualified to operate manual cargo moving tractor emitters.