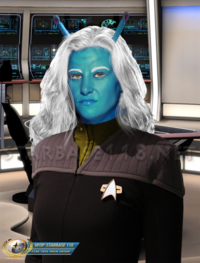 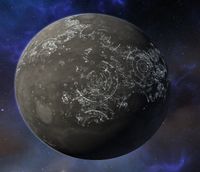 Originally natives of Cheshras Island on Andoria, Sera's clan migrated during the Dominion War. Small in number but with generations of experience in component fabrication, clan Aella settled on Lunar One Colony were the adult members eagerly began work in nearby shipyards and component factories. But while the adults of the clan were able found a meaning in contributing to the war effort, Sera found the experience extremely challenging.

Along with all the normal teenage issues, she had the added difficulty of not being able to bond with mostly Human residents of the colony. Often left confused by social norms of the residents of her adopted homeworld, her first year especially was lonely as found socializing with her peers impossible and spent much the year as an outcast at her school. Her isolation only changed when Sera joined the high school wrestling team, naturally disciplined she found the tough wrestling practices and competitions extremely fulfilling. As her skills developed she found increased comradery her teammates and slowing began to socialize with more success. Overtime, Sera became increasingly more comfortable with social interactions and developed a dark sense of humour.

Sera studied engineering in during her high education and received an apprenticeship at a medium-sized freighter shipyard orbiting Europa. She found the work acceptable but after eighteen months decided that she wanted to travel before focusing on her career. After spending two years traveling the Federation, she found her way back to Andoria. While on her birthworld, she visited the Wall of Heroes memorial. While visiting the memorial she experienced a private epiphany and soon after put in her application for starfleet.

Sera attended the Starfleet Academy training facility in Marin County, Earth across from the Golden Gate Bridge. Already an apprentice civilian engineer Sera selected Engineering as her Major and, after some deliberation, chose Helm/Navigation as a Minor. Throughout her Academy training, Sera showed herself to be excellent in the fields of Propulsion systems and component engineering however sometimes struggled in the field of programming and her lack of skills at improvising caused some concern from the courses assistant instructor, Senior Chief Petty Officer Leigh McMann. In her 4th year, Sera decided to base her thesis and final project on Alternative Faster-Than-Light Technologies for which she received an A-. Her final exam, aboard the USS Centris-A, was conducted by Commander Brell and Lieutenant Commander Rustyy Hael. While Sera missed her goal of graduating in the top ten percent of her class she was pleased with her eventual position, 37th out of 212.

While at the Academy Sera chose wrestling as her main Extracurricular Activity. Despite having been on her high school wrestling team Sera lost her first three matches at the Academy, relying too heavily on her natural strength and speed instead of technique and timing. After a long discussion with the team's coaches, Sera was able to adjust her training and competition style. She eventually managed to build a very respectable record after these initial setbacks and she considers being part of the wrestling team as one of her favorite memories of her time at the academy.

On Stardate 239406.06 Ensign Sera zh'Aella joined the USS Gorkon, under the Command of Fleet Captain Quinn Reynolds, as an Engineering officer.

Sera's first mission takes place in the underground cave complex of Leutra IV. Sera makes her introduction to the rest of the crew in an unforgettable manner and gains a permanent fear of spiders.

Waking up in complete darkness, in a cave under the surface of Leutra IV is not how I expected my career as a starfleet officer to begin. It took me a few confused minutes to remember that a massive solar flare that knocked out all our equipment and forced us underground, but I still don't remember how I got trapped in a fissure. Four years of Starfleet academy and not once was being buried alive in a cave mentioned. I managed to signal for help but my rescuers were a heard of giant spiders, I've never been so scared. I was convinced that I was going to be spiderfood, how was I to know that they were mechanical spiders? They dropped me literally kicking and screaming at the admiral's feet, oh god… I'd even started biting them while they carried me. The first time my ship mates see me and have a mouthful of metal spider and my face was covered in hydraulic fluid. I hope suggesting and uploading Federation Standard to spiders, the 'Keepers', restored some faith in my ability as an officer. Thankfully they turned out to be peaceful and never made a complaint about me.

On Stardate 239409.09 Sera zh' Aella was promoted to Lieutenant Junior Grade and assigned to Helm/Comm/Ops.

While at the Helm of the Gorkon, the ship suffers a catastrophic failure of the slipstream drive leaving the Gorkon stranded in the deadly Roman Expanse. Sera joins the Engineering team who attempt to restart the warp core, as their efforts progress they realise that there is a subspace creature feeding on the ship.

My first time at the helm and the ship suffers a critical failure of the Quantum Slipstream Drive. No one blamed me but it felt like a punch to the gut, or that feeling might be because the helm console was slammed into my stomach during the emergence exit from warp. Thankfully the inertial dampeners held out and stopped us all from turning into a squishy mess. I got to work closely with Commander Sevo, Lieutenant's Stoyer and Marshall in restarting the Warp core. It was one for the books, we had to use old Warp Plasma Canisters and then cold start the drive. Turns out we had a subspace creature feeding on the ships EPS conduit network and not a small creature, this was a giant subspace octopus which had snared the Gorkon. Me, Cory and Jo saw the monster's tentacles phase through the walls without creating a breach. I imagen Starfleet Command will quarantine that region of space, we saw some old ships there before we escaped, so that creature must have been feeding for a long time.

Sent to investigate the disappearance of the crew and civilian population from Starbase 173, the crew of the Gorkon stumble across an Orion Syndicate plot to steal ancient Romulan artifacts. During this mission Sera engages in close quarters combat, helping to defend the station's hospital from Orion invaders.

We were sent to investigate Starbase 173 which had gone silent and was devoid of all life signs. My team discovered that there were survivors, a Cadet was held up with a group of children from the station's school in one of the cargo holds. They were shielding their life signs using bio-inhibitors, a fact we learned after the cadet attacked us like a wild animal using her empty rifle as a club. She had some wild theories, but she was also able to give us some useful information. A few officers from the science department had survived and were heading to the stations hospital with wounded. We found them right before the Orion Syndicate announced their presence by assaulting us. We held them off using phasers, blades and even knockout gas but other away teams on the station weren't as lucky. Leigh was stabbed through the chest by an Orion thug. Another team was gassed on the orders of the Syndicate's leader, Leelou. They had a child with them. If I ever see Leelou... Me wearing this Starfleet uniform won't save her life. Oh, and there were more subspace monsters, insects this time. Turns out the crew of 173 was stuck in subspace due to an ancient Romulan artefact, the same thing the Orions wanted. They were all returned looking like half frozen popsicles, Jo was trapped there for a while too but she seems to be doing okay now.

On Stardate 239503.31 Sera zh'Aella was promoted to full Lieutenant and assigned as the Gorkon's Cheif of Security & Tactical.

During the Gorkon's mission to the Romulan Republic colony of Sikuna, Sera leads her first away team. During the mission her team fights a raging fire, subdues a saboteur and leads an assault on the bridge of the IRW D'delnor. During this final action there are many casualties, including Sera who was stabbed twice in the side of her torso.

I was stunned when the Admiral named me as a leader for one of the away teams but I think I did okay. My team on the other hand, did outstandingly well.

We were beamed down to the security centre it the hopes of finding out how the sabotage took place. We were in the middle of our briefing with the security supervisor, Tomolak, when an explosion erupted through the building. Tomolak had put his most trusted people in the mess hall for us to interview first, unfortunately the saboteur found out and blew it up. Cory led our firefighting efforts supported by Emilia and Ferier, we put the blaze out and managed to save four of the officers who'd been present in but we took some injuries and spent the rest of the mission in ripped, soot covered uniforms. I requested Brooks join us to tend to our wounded, right before we were attacked by who we assumed was the saboteur. We subdued him, and found out that he was an Andorian altered to look like a Romulan. Unfortunately he was only a lackey, the actual subator had beamed away to the Warbird IRW D'delnor.

Commander Reynolds' team had found the ship buried and had half captured it when the remaining crew put the ship into orbit and secured themselves on the bridge. The Commander beamed my team aboard and together we assaulted the Bridge. We were the diversion force, we went in through the turbo lift entrance and got all the crew's attention. We could only have been by ourselves for a minute before the other team hit the defenders in the flank, exiting for main access tubes, but that firefight felt like a long time. I the midst of it I managed to get myself stabbed, twice. Some big oath pulled me out of the lift while I was leaning to get a shot, he beat the hell out of me before I managed to get hold of his neck and choke him unconscious. When I tried to get up I had two holes in the side of my torso and a Romulan dagger sticking out of me. Jo made a few jokes at my expense but I can tell she was worried, she's so cute when she'd worried. Fortunately Brooks managed to keep me in the realm of the living until the sickbay team got their hands on me.

I've decided to keep the scars. I can't really explain why, it just seemed wrong to have them removed like they were never there after everything we went through.

On Stardate 239508.17 Sera zh'Aella was temporarily assigned to the Klingon Bird-of-Prey IKS Gre'Thor as part of the Starfleet Officer Exchange Program.

Sera is on secondment to the IKS Gre'Thor when the Klingon Bird-of-Pray enters a nebular following a Starfleet distress signal and learns that the USS Ceres was destroyed by Orion Syndicate cruisers. After picking up a group of Marines from Ceres in a dying shuttle, the Gre'Thor proceeds to a nearby Sydicate station to liberate the rest of the captured crew. After boarding the pirate station the Klingons discover that most of the Ceres' crew were excited by the Orions in retaliation for a failed escape attempt. Furious and overwhelmed by the scenes, Sera attempts to execute the captured pirate leader but is prevented by her ship mates. This incident is covered up Sera's Klingon CO. While withdrawing the Gre'Thor is ambushed by the Orion Cruisers and suffered heavy damage.