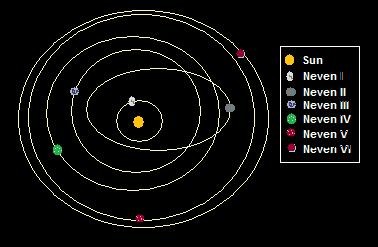 Class-Ds are also known as Plutonian objects and are generally not considered true planets. Like all other Class-D planets, Neven I is not suitable for humanoid life, although it has been investigated for possible automated mining operations. Currently, not enough minerals are present to warrant mining activities.

Neven II is a Class-F world with heavy volcanic activity. Steam expelled by volcanoes is believed to be the source of shallow oceans where simple bacteria thrive. The volcanic activity, coupled with the planets highly elliptical orbit, make Neven II unsuitable for any type of terraforming or manned outposts.

Neven III is Neven IVs first attempt at terraforming a colony world. Currently, the planet is 15 years off from being ready for colonization. Within the next 5-10 years, plants from Neven IV will be introduced, following that animals and finally colonists will be brought over.

Neven IV is the Neven systems only inhabited world. It is approximately 38% surface water. It is the home to the Nevenian people. Neven IV has one small moon.

This is the first planet in the Neven systems cold zone. It is a very cold planet with a thin atmosphere. It is incapable of supporting life. Automated mining drones, in conjunction with a mining station in orbit, collect resources for the population of Neven IV.

The last in the Neven system. It is a cold desert planet, similar to the tundra of northern Canada on Earth. The only lifeforms on the planet are cold resistant plants and research scientists stationed at a temporary research station located at the planets north pole.