From 118Wiki
< Lael Rosek
Jump to navigation Jump to search 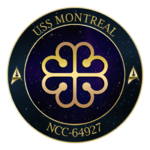 Transfer to the Montreal

When the USS Montreal arrived early at the rendevous point, Lael was instructed to gather a team and beam aboard with Commander Mei'konda as well as Chythar and his team. Once aboard, Lael and her team headed toward Engineering to meet with the Montreal's acting chief engineer, LtJG Francis Michaels. Hours into the diagnostic and repair process, Lael was asked to meet Mei'konda in the captain's ready room where she learned he was taking over as the commanding officer of the Montreal due to the seriousness of Commander Zhou Tai-Sheng's injuries. He then asked her to be his first officer, which she gratefully accepted.

SIMS: An Offer Too Tempting to Refuse

Enemy of My Enemy