Petty Officer Christopher 'Soup' Johns is currently serving as an Operations Officer aboard the USS Gorkon. 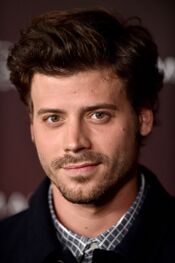 He hates knowing he did his best, and it wasn't good enough. If he didn't do it right, he'll try again until he does.
Seems to have two personalities - outgoing, robust, and funny - moody, dismal, and distant.
Has secrets. Hides them well.
Strong-minded, sometimes misunderstood, very protective.
Strives for a sense of simplicity with a childlike wonder of space.
He believes in strong friendships, deep love, and the benefits of having a good bath.
Can put his heart in the wrong place. Is learning slowly.

Years in the building, through one lifetime or another, the small family of the t'Sienelis clan residing on the USS Gorkon.

The Yanovna name is grand in his homeland and throughout the galactic stage - a combination of centuries-old money, a corporation of vast power and influence, and not inconsiderable political influence. Chris has distanced himself from his family in recent years, due to several revelations he isn't proud of. Because of this, among other factors, he likes to use the Federation Standard version of his first name, Christopher, instead of Krištof (Криштоф), and to distance himself from his familial legacy, he uses the surname Johns - the Latin form for his mother's maiden name "Ivans".

Friendships have always come easy for the outgoing young man, who will talk to anyone if they stand still for long enough. He looks for personalities in people he admires or bounces off. The easy friend who will be there for someone in a day, in a month, in ten years - whether they've kept in touch. His family he chooses.

The youngest of five siblings, Krištof (Криштоф) was born and raised in Saint Petersburg, Russia, in a large house on the Neva River. He grew up surrounded by dancers, with his eldest brother, sister and mother as troop members of the Mariinsky Theatre. Chris learned to dance at a young age and is an accomplished, and decorated, ballet dancer. There was an expectation that he would follow his siblings into the arts or professional sports, and for a time, he participated as part of the Corps de ballet, earning Coryphée slots in specific pieces and demi-soloist in others, such as Konstantin Lëvin in Anna Karenina and the role of Puck in A Midsummer Night's Dream. He is also a hobbyist artistic skater, though he has lacked in pursuit of this hobby since his recruitment into Starfleet.

Never really feeling like he belonged in the dancing world, complete with all the drama he couldn't keep up with, Chris set his sights on a higher calling. Refusing to join the ranks of the family firm, and still undecided about his future, he instead opted for enlistment in Starfleet, recruited into the Starfleet Command training school, completing his single year intensive training in 2392. He threw himself into the work and study, graduating from the Academy with Crewman, First Class rank and a posting on the newly launched vessel, USS Gorkon.

He keeps himself in excellent physical condition and uses the holodeck as training for ballet practice. He likes good food, especially flaky pastries, warm coffee on cold evenings, snow, skating, and open fires. He likes reading long novels about strife and tragedy, which contrasts with his happy personality, but there you go. Anna Karenina by Leo Tolstoy is his favourite book, with the central theme that happiness cannot be built on another's pain. His favoured line from the novel is the opening one, ("Happy families are all alike; every unhappy family is unhappy in its own way.") which says more about his family relationships than he likes to talk about.

During a shore leave spent on Deluvia IV, Valesha was charged with murder, espionage, and treason for crimes committed before she joined Starfleet. Refusing to believe the charges, the situation it threw them into — her escape and subsequent adventures — left Chris in no doubt who held his heart. Unable to do anything but wait, when she returned to the ship she'd been poisoned by a Romulan plant targeted for her specifically. For days as she recovered, he didn't leave her bedside in Sickbay, and finally when they both escaped down to Earth together, she confessed her love for him and he requited. The couple became engaged on 239612.14 and married two years later on 239808.07. They are expecting their first child; a daughter they have nicknamed Rybka, meaning "little fish" for Valesha's passion for deepsea diving.

For now, he is happy riding along the waves of his career in Starfleet, and preparing to become a father. He has less than two years left on his enlistment, and only time will tell if he continues with it.