Ensign Wanda DyAmone, a Terran, is currently Chief Medical Officer aboard the USS Atlantis. Wanda makes you think of a strutting cat. She has narrow green eyes. Her luxurious, straight, blonde hair is very short and is worn in a severe style. She is very short and has a feminine build. Her skin is light-colored. She has an elegant nose and thin eyebrows.

Wanda rarely spend much time in her quarters, so they are for her a place to change and to rest. They are clean and always in perfect order, those few things she must have are always in the same place 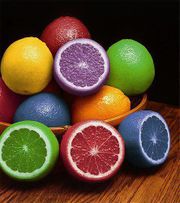 Citruses, how Wanda most often arrange them on the table 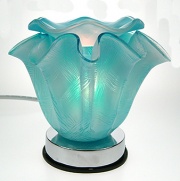 She is cuddly; to her patients she will always give all her heart, hug them, pinch their cheek, pet their hair, even kiss them if she think it will help them feel more comfortable, feel better.

Born to Marine officers, Wanda was always forced to follow a plan and orders. If not it incited lot of yelling what made her cry and again incite even more yelling. With time she learned to listen without listening and take everything with a dose of humor. She is quiet listener always maybe even over-analyzing everything happening around her before she will react toward or against anything.

Wanda can act fast, having fiery nature at times, but then always choose to take a good night sleep or meditate before any possible confrontation. She fears being questioned about anything, because she can get easily scared and when pushed will hardly keep strong.

Whole her childhood and bigger part of her youth her only goal in life was to be different from her parents. For that she chose nursing school, wanting to be in a trade which heals instead of killing. Her parents were tough and always wanted her to be tough and Wanda always rebelled against it and run from it. After she went to the humanitarian mission to the colony stricken by hurricane when their weather satellite got destroyed. There her friend got badly ill and while the team had enough nurses to treat everyone, they didn't have enough of highly trained doctors and medical scientists. It caused lot of deaths among badly ill and injured, both colonists and volunteers and that made Wanda decide she wants to be a doctor. Her decision to join Starfleet was abrupt, also was her choice to be an officer, but once she chose the path command became her aim.

When her parents decided to stop financing her education, after she chose the path they didn't expect her to take, she started modeling and was good and wanted for many fashion shows for several years. Being independent was something she was proud of and something her parents greeted as a sign that she is properly growing up.

Though they disapproved of Strafleet, her parents were proud of her graduating it and even showed great pride in it, asking her to send her Cadet uniform for their collection (her parents are keeping a collection of all uniforms they wore during their time in various Marine Divisions).

Wanda's family has a long streak of rebels and nonsense creators in their past. As a Family line Marousse they were famous owners of the small local factory. Once it was toy factory, then changed into the packing factory. With several members of the family becoming engineers, it changed into the electrical trains factory... and then came Wanda DyAmone The First. When she changed her name to show dismay of her Family, she made a rule that the only Wanda DyAmone can inherit the Family estate and the Family business. In every generation, first female child born in the Family has to be named Wanda DyAmone and carry on the name and the burden of being head of the family. Up to her time the family thinned and Wanda now has only two cousins from her father's sister, previous Wanda DyAmone. To her surprise, when she joined Starfleet they offered to run the estate and now, lastly the engineering laboratory for her.

Wanda is her parent's only child, though she has a big family with lot of cousins, but only two in the first line.

Her parents wanted to have another child after they retire. It even happened to her mother to get pregnant, but during last mission she went on, Rosemary got badly injured losing the unborn baby. Plan is to have a year for them and then seek the child to adopt.

Wanda was born on the Family estate in Lorient, France. Her father demanded that from his wife, who reluctantly accepted it. As a child she lived aboard several Marine vessels and various colonies with her parents, always unhappy with the life in confines of the Marine compounds.

Worst part of her life was the time after the liberation of Betazed, which Wanda spent on the planet with several other children, mostly constantly closed in one of the family houses on the suburb of the capitol. There she lived in the house of the local High House Family Imsary and befriended their younger son Sayre Imsary. After they almost got bombed, her parents decided to send Wanda back to Earth and leave her to the care of the Family on the estate.

Wanda was rebellious, she didn't like the life she was living with her parents, but being without them hated even more and though she never told them that, she was causing lot of trouble, trying to make them change their life to accommodate her. As often, instead of talking to her and trying to find the solution to accommodate everyone, they decided to send her to boarding school and put under control. Obviously it didn't help and after a year when Wanda was expelled from boarding school they gave up and let her live her life as she wants.

Wanda chose nursing school and when finished it went with her childhood friend to the colony whose weather satellite got destroyed. Up to that moment she was bitter child, but she never realized that till the moment she saw there children without parents who had nowhere to go, nobody to take care of them and give them any love. People who lost everything in the hurricanes that hit the colony, lost loving ones, lost limbs and health... that was the moment Wanda realized how lucky, happy and full of love her life was. Her parents were maybe tough, but they were marines and they had to be tough and in a way they taught her, trained her to be tough, tough enough to learn life herself.

After some consideration and checking her options, Wanda lastly decided to join Starfleet and after some preparations managed to get into the Academy. 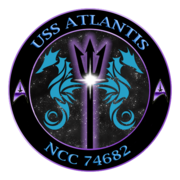 Her office is clean and empty of all personal items. There she keeps only her medical bag, when it is not displaced somewhere in the sickbay, where miraculously always nurses know when she needs it.

Always wanting to be sure she will have access to her medical bag she asked a friend from her year who was in engineering to make her a lock for her bag which will be similar to commbadge in the way that she will always be able to contact her bag, in cases she may displace it somewhere or as a communicator and transporter locator. Before it was installed she was always losing her bag and had long chase for it and got in trouble because of that. After it was installed, Wanda rarely used it. Murphy’s law. Since it was easily findable, secured with the locator, her medical bag was miraculously always at hand.