Ensign Tya Dirsye, a Betazoid and a Lady of the Tenth house of Betazed is an Engineer aboard the USS Blackwell, part of Andaris Task Force. She is deeply emotional person who can't stand injustice. Tya is antithesis of expressions and emotions and only Betazoids will ever be able to know how and what she really feels. You will always see her with wide smile and a smile that is not just a plastic cramp on her mouth she is always smiling with her whole face, looking like the happiest person in the universe. 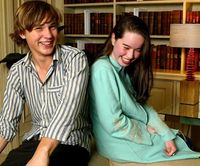 Tya’s bondmate Roay claims he is not ready for the commitment. Tya is not either, but she would always do as her grandmother says, no matter her own wishes. Roay is archeologist and Tya currently don’t know his whereabouts. Tya returned to Betazed to run the ceremony for his burial, but still didn't accept that he is dead.

Pregnant with twins. She currently still don't know she is going to have two children.