Lieutenant Commander Trellis Vondaryan is currently serving as Chief Intelligence Officer aboard the USS Gorkon. An alternate version of Trellis Vondaryan served as a Black Market Dealer for the Maquis on the Skarbek.

Trellis is an eternal optimist. He will find a positive in any situation, no matter how dire. Due to his analytical nature, he likes to believe there is a positive and peaceful solution to any problem. He is also extremely curious. He enjoys meeting people from all across the galaxy. He finds all people fascinating. He is quick to smile, laugh and make friends. Trellis loves all puzzle and trivia games. 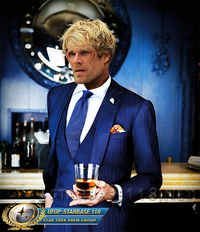 Stardate 237908.15: Visits Romulus with his mother (on assignment), soon after the coup by Shinzon. 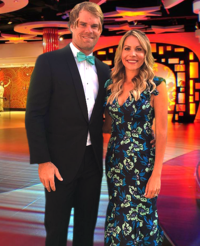 Trellis and a friend enjoy a formal party.

Stardate 238808.17: Joins StarFleet Academy. There he meets Haylie Johnson, a Human and his closest friend.

Stardate 239212.21: Awarded the Innovation Ribbon for service to capturing a rogue StarFleet ship.

Stardate 239302.01: Promoted to Lieutenant and confirmed as Chief of Intelligence.

Stardate 239303.20: Awarded the Innovation Ribbon for service in solving a troubling Tribble crisis; Joint Meritorious Unit Award for acting in conjunction with the authorities on Tilanna V to capture a murderer.

Stardate 239306.11: Promoted to Lieutenant Commander; awarded the Purple Heart for his experiences in getting phased into a different dimension.

Stardate 239310.29: During the Za's Halloween party awarded the Joint Meritorious Unit Award and First Contact Ribbon for working with a new species, the Deep, to help cure a deadly disease.

Stardate 239311.06: During the Halloween party Captain Solzano passes along awards from Captain Taybrim on Ops. Awarded the Silver Lifesaving Ribbon and Captain's Commendation for leading the infiltration team that rescued and recovered a captured Starfleet away team, which helped ensure the success in recovering and protecting the Lady Shadonna. Also recognized for participating in the War of Shadows.

Stardate 239402.26: With Fleet Captain Solzano having departed the Za, Captain Rhani leads her first awards ceremony. A small get-together on the holodeck replicating the lunar landscape. Trellis awarded the Maiden Voyage Ribbon recognizing that he helped launch the Za.

Stardate 239406.21: After a first contact mission with two factions from the planet Hocktin, Trellis, Captain Rhani and and Lt JG Pandorn are kidnapped by Field Marshall Numiz of the Justio nation. During the encounter they are all infected with a deadly virus that kills within 72 hours.

Stardate 239407.05: Trellis, Rhani and Pandorn rescued from Numiz's clutches and cured of the deadly virus. Given notice of the Za's recall and transfer to the USS Gorkon.

Stardate 239409.09: Awarded the Explorer's Ribbon, Purple Heart and Prisoner of War Ribbon from his mission with the Za on the planet Hocktin.

Stardate 239411.06: Reassigned to Starfleet Intelligence Headquarters in San Francisco for analysis of the Orion Syndicate.

Stardate 239506.10: Returned to the USS Gorkon as Intelligence Officer.

Stardate 239507.03: Began a relationship, of sorts, with Tasha MacFarlane.