Lieutenant JG Haylie Johnson is currently serving as a Xenobiology Specialist aboard the USS Gorkon.

Haylie's best friend from the Academy. Her brash, outgoing manner helped the young Vissian open up. She often acts as his interpreter for human customs and humor. She will also get him to experiment with new foods and drinks, offering what she finds best. He does not often agree with her choices.

Haylie was born in New Orleans, Earth to Ralph Ellison Johnson, a civilian commercial pilot, and Mae Carol Johnson (nee King), a civilian engineer, the oldest of three children, in November 2368. Her brother Benjamin Lafayette was born in 2372, and Louis Armstrong was born in 2374. Haylie's mother was killed in an engineering explosion in 2376 when Haylie was 7, sending her father into a deep and prolonged depression. Ralph became distant to his children, sometimes going so far as ignoring them for days on end. He would take longer and longer flights as time progressed, eventually spending most of his life off-world flying spaceships.

When their father was away Haylie and her brothers were given to the care of their aunt (their mother's sister) Octavia Butler Walker, a mathematics teacher. This brought Haylie closer to her brothers, acting as a surrogate mother-figure for them. As Octavia lived on a large farm there were often animals around, piquing Haylie's scientific curiosity from a young age. When she was still a teenager she interned with a veterinarian, then worked at the London Zoo after high school before applying to the Academy. She specialized in Xenobiology and genetics.

Benjamin, sometimes referred to as "Benji" or "Benny", is currently a chef at a New Orleans restaurant. Louis is in his final year of study at the Aldebaran Music Academy, where he specializes in jazz-fusion keyboards and trumpets.

Haylie is very forward and open. She prefers acting first before thinking through all the consequences, expecting the situation to end well no matter what. She is an adrenaline junkie and enjoys "extreme" sports such as skydiving. She is an optimist, one of the traits she shares with her friend Trellis. She loves food, especially the rich foods of her home city, and coffee. She is quick to laugh and even quicker to forget a slight. 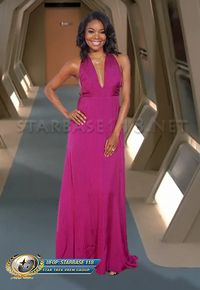 Haylie ready to party on the hull of the Gorkon.