Upon arriving to the sector of space the USS Arrow was believed to be in, the small vessel was found among the asteroid field. Captain Nugra ordered two away teams one lead by Lt. Commander Eerie and the other lead by Lieutenant Ayiana Sevo. Eerie's team's goal was to see if the Arrow is capable of moving under her own power while Sevo was to attempt and find out what happened to the ship and crew so many years ago.

Onboard the Victory though, Lieutenant Tarsii Asmara discovered that the ship was sitting in the middle of a faraday cage which allowed the Tholian major get a drop on them. Firing a previous unknown weapon, a bulbous orange torpedo that attached itself to the Victory's hull. A lattice like web began to crawl across the hull raising the radiation levels on the ship.

The situation aboard the USS Arrow did not improve as two Tholian boarding parties mixed with Tholian and Chakuun boarded. One team headed for the bridge while the other team was intercepted in the rover bay where Commander Alucard Vess and Lieutenant Talia Kaji got in to a firefight.

Though a rough and dangerous engagement, the away team was able to supress the Tholian boarding squadron. Unknown to Lieutenant Ayiana Sevo and Petty Officer Shedet, it was only a distraction team and so the two stumbled upon the Tholian and Chakuun on the bridge searching the ancient ship's database for information.

Instead of attacking, Lieutenant Sevo attempted to negotiate and though the Tholian, 1st Lieutenant Takil, was not interested in talking, he did not attack and retreated from the bridge as soon as the information was collected. Before leaving, the last Chakuun dropped to the floor a isolinier chip with the same information they copied and cryptically told her that it was to save the lives of its brothers and sisters.

The Victory Gets the Upperhand

The Victory was able to get an upperhand against their opponent when Ensign Bren was able to figure out how to create a graviton wave that would allow the Intrepid class starship to target the Tholian. They were able to hurt it badly causing the ship to retrieve its boarding parties that were still alive and flee.

In the process, Captain Nugra was injured, being blinded in one eye and so as they returned to Starbase 118, he decided to step down from command as the Victory herself was being returned to the docks for repairs.

The test run of the new technology became the final voyage for the Victory crew as the old ship was parked for an indefinite period of time. 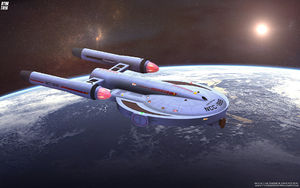 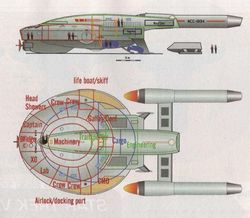