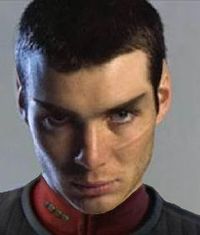 Captain Saveron is the commanding officer of the USS Ronin-A and a leader within the Federation rebellion in an alternate universe where the Federation lost the Dominion War.

Meeting the man, you would never know that Saveron was a child of an earlier, peaceful time. A physician living on Vulcan with his bond-mate T'Rel and their children, he knew the Federation as it was, a dream that many of his younger crew can barely remember. All that changed when a his bond-mate invoked the right of challenge which ended messily and against all tradition. Saveron left Vulcan, unable to remain but without anywhere else to draw him, he drifted for a time, angry at fate but unable to express that anger as Vulcans did not. Then the War began. Suddenly there was a use for anger.

One of the few members of the crew to have completed the traditional four-year Academy course, Saveron excelled in the Tactical stream, proving an efficient and ruthless soldier and commander of troops, with one of the best survival rates as the War waged on and grew ever more dark and hopeless. He is now the Captain of the USS Ronin-A, one of the last ships completed at the Federation Shipyards before they were destroyed. Against all the odds, he and his crew continue, though there are those who wonder whether their cold, unreachable Captain has forgotten what they're fighting for.