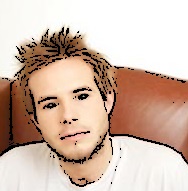 Tristam Core is (officially) a civilian medical technology engineer aboard the USS Ronin-A in an alternate universe where the Federation lost the Dominion War.

Unofficially, he works in a slightly more complicated position aboard the Ronin than what one would assume at first glance. Tristam is a very good information broker, general trader, and has occasionally acted as a con artist. During times where the Ronin does not need any of these skills, he works with the technology in Sickbay and keeps out of others way as much as possible. He boarded the Ronin with a wealth of intelligence on the Dominion, refusing to share his sources. Some are suspicious of his presence on the Ronin, despite his numerous attempts to alleviate concerns.

Tristam was born and raised on Rodul. He was 10 years old when the Dominion was began, though his people remained a neutral party, not particularly useful to side of the conflict due to a lack of notable military force and even less notable resources. Life for the Rodulans changed little when they joined the Dominion. Their planet now acts as a sanctuary for Dominion civilians from both the Gamma and Alpha quadrants - Tristam has fond memories of studying with a Cardassian boy living next door to his family's home. In short, Tristam has never seen the reality of the Dominion War. When he came of age, he and his brother were cast away from the homeland in a "rite of passage" - he and other Rodulans his age told not to return until having proved himself useful to the Dominion. It seems, however, that Tristam cares little about proving himself to his people.