Sundassa is a Medical Officer on the USS Constitution-B

Sundassa was born as the middle child of a couple owners of a successful farm on Antosia, Mindysta and Teem Faranster. Both siblings are brothers, however one if 5 years older, the other 3 years younger. The farm itself is settled on a nice acreage of land, allowing the stars to shine down on them in the night sky.

Her years growing up were spent riding horses, helping her parents with the farm, playing in the lake nearby, and at night, looking up at the stars, wondering what was out there, feeling drawn to them. Her uncle, Dajax, only helped fuel her need to be among them by telling her stories of his journeys as he was stationed on board one of the Antosian cruisers. 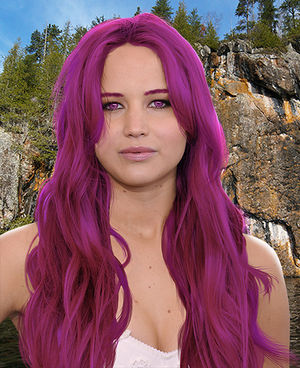 Her older brother, Shelther, was also made curious by the stories, but at the same time he wanted to help their parent's farm continue to flourish, so he studied sciences and joined the Antosian military, hoping to find methods to assist on the farm. Her younger brother, Yogar, decided to help from home.

Sun's path, however, became clear to her in a moment of helplessness. She was watching her younger brother and his friend, a little girl, Emmye, enjoying taking a ride on their horses. Suddenly the horse was spooked, throwing the girl, who ended up with injuries that were fatal. Sun wasn't sure if she had medical training if she could have saved the girl, but she certainly could have made her more comfortable. Since then, she worked hard and got into medical school.

After that, she was taken back to the stars, she was thinking the Antosian military as a doctor, since they had better research, and it would keep her close to home near Marseen. That plan changed when she graduated Medical School. There was a party in her honor, and he was supposed to be there to share the moment with her, and support her. But at that moment, he felt that a joy ride in a military spacecraft was more important than showing up. Left brokenhearted and humiliated by his actions, Sun decided to join Starfleet Academy instead.

At the Academy, even with a diverse group of people, she still stood out, as her natural hair color announced her before she could get any words out. She also was considered to be a bit of a food snob, regarding replicated items, and wasn't invited frequently to go out. This provided her with ample time to work on her studies, but she found herself frequently lonely.

Her studies consisted of Medical training, but she continued her education into the alternate field of Communications and Operations, after a simulation in her Diplomacy class. She had been curious how different situations would have panned out. One of her classmates in one of the shared classes, explained his major and how it got down to the basics of running a ship. She was further intrigued by the fact that it would allow her to get to know her fellow crew members in a less clinical manner. After the training, she still felt more comfortable in her medical training, but had the knowledge to go into a different field if needed.

She was assigned to the Apollo right after graduation, and upon arriving she was thrown into her first away mission, first shuttle crash, first field operation. And her first time since she started her journey through medicine feeling helpless for her patients, when they were stranded on the planet. It left her a bit shaken for a couple days as she got used to all the changes.

Shortly after Jaxx and Sun parted ways, the Senior Staff including Jaxx were held hostage alongside other patrons of the restaurant they were dining at. She worked with the help of her fellow officers, both old and new, to rescue the occupants of the restaurant. She kept on point, even though she was concerned about her friends. Due to some creative talking from Lieutenant Vincent Pierce, who caused a chain reaction of chaos that allowed the senior officers to subdue the captors, Sun and her rescue team were able to storm the building. What she regrets about that incident, was that she didn't ensure that Lieutenant Marcus Raiden knew who the senior officers were, which caused Jaxx to get shot in the process.

Even though Sun at first wanted to take things slow, because of the shooting, she realized that she should live life and embrace the passions that come with living. Since she embraced that, she has moved forward with a relationship with Jaxx. Even though at first things happened pretty quick, they feel completely right to her. Only time can tell where they go, but if it is as fun as where they have been, she doesn't mind the journey.

Since then bonds of friendship formed while others dissipated. Her and Vincent Pierce no longer seemed to see eye to eye. Marcus Raiden was responsible for shooting the man she cared about, but also responsible for her realizing that she should live without regrets, so she had mixed feelings about him, and later felt bad that she had spent so much of the time she knew him, before his death, upset at him instead of getting to know him. Lieutenant Commander T'Mar and her decided to dive into their own little adventure, testing out the combat practicality of jousting.

It was after she had started seeing Jaxx, but before they became serious, that he offered her the First Officer position. Since then she has been trying to balance the life of Lieutenant Commander Faranster, and Sundassa Faranster. She was still getting a hang of taking care of the ship, and watching out for the crew in a non-medical way, but sometimes it was harder to put away the doctor inside her. At the same time, she has to maintain a professional relationship with Jaxx while on the bridge, keeping her personal relationship behind closed doors.

Only when her brother came aboard, did she finally reveal her relationship to her best friend, not wanting Jalana to think she was keeping secrets.

During the first few days of her brother's visit, she found out the hard way that the men in her life conspired together. Her brother suggested target practice since she was now First Officer, and no longer a medical officer. Little did she know that he planned on teaching her a lesson about planning experiments that could be harmful just for the sake of knowing the answer. When they arrived at the holodeck, Jaxx was there to test her, as was part of the conspiracy between the two men. As she was finishing up the test, and target practice, he brother took his opportunity and shot her. It was later that she found that Jaxx was part of the planning, and they hijacked her experiment to see what a phaser felt like.