Commander Rilem Danoel is Stationed on StarBase 118 Ops he is assigned to the Black tower and is part of the Intel Team, but works outside of the Chain of Command due to him being an Internal Affairs Chief Investigator, a job that he takes very seriously. Danoel reports to the Chief of Intel and a Political Appointed board of Professional Responsibility, along with the 118th Fleet Inspectorate General. His Internal Affairs office that he manages is Professional Misconduct and Criminal Behavior, the two use to be separate departments, ran but a Lieutenant. Chief Director Allison Morgan merged the two departments into the new Internal Investigations Division (IID) inside the Unit of Professional Standards and gave Lt. Commander Rilem its command. Danoel also sits on the VICE review board as a rotation member of the council made up of Ops Security and and Black Tower VICE members, Danoel's only duty would be to break a tied vote. Danoel does not have much time for the social chit chat, he is all business when on duty, off duty he tend to keep to him self, scared to open up to people in fear that he may become attached to them and the loose them.

Danoel was born in a cave during the Occupation of Bajor. His family were wanted by the Cardassian Union so they fled to a Bajoran Resistance Camp. Donael's father Rilem Kylo was a Vedek under Kai Opaka at one point in his life but after he gave aid to a Resistance group he became a wanted man. Kai Opaka released him from his duties and he went into exhale out side of Dahkar in 2362. While hiding in the caves Kylo tried to help the Resistance members with there faith. He meet Jenola Nesco there, a pilot. The two feel in love were married a month later, nine months later in 2363 Donale was born. Fearing for him and his life with the Resistance he was sent to live with the Kai, and to be raised in the faith, Former Vedek Rilem had high hopes his son would one day be Kai of a free Bajor.

Sending him away turned out to be a smart move, as the cave was raided a week later and all were killed by the Cardassian Death Squad. Danoel was trained by a Vedek and he was a great student at a young age. What happened to his parents was never hid from him, and he would study endless hours about the Profits and the Orbs along with the history of Bajor to try and make his father proud.

He started hearing rumors about his parents, that there were not dead but were locked up at camp on the out skirts of Dahkur, where the Cardassian housed its supply network to and from Terok Nor. Danoel spent months hiking out on the outer trails round Duhkur, studding the Cardassian troop movements and mapping the river to the Supply station and the work camp.

Once he had made it to the supply camp he would set out side of it hours at a time drawing it, mapping it, making notes of it, he had filled to binders with drawings and maps. He watched daily for months as shuttles came and went and as inmates would work. Until he finally saw them, older but he knew them from the only photo he had, He saw his mother that morning and his father the next day.

Danoel back in the temple later that night, looked to all to be studying something in depth but in truth, he was planing his rescue of his parents. Later that night he slipped out and made his way back to the work camp, he made his way inside and killed a guard as an older Boy, he was strong and very stealthy. He had found his parents and got them out of the cell, but on the way out tripped an alarm.

He and his Parents were found, and taken down. The Grand Guard of the Cardassian Unit had Danoel's Parents executed in front of him and then he was beaten and sent to Terok Nor to work in the Ore processing center, being a young strong male.

Danoel had been sent to Terok Nor's labor camp as a POW, while he was never a member of the Resistance he was treated as such. Once he arrived trhe Cardassians stripped him down and took all his clothing and cleaned him with a powder that burnt his skin and really burnt his eyes and noise. After being cleaned and issues a work uniform that was little better than rags he was sent to the debriefer. 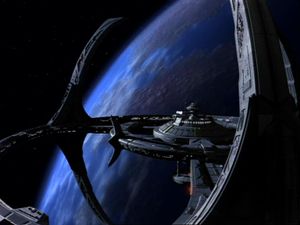 Danoel was beaten by the dedriefer, and was stuck with many different things to get him to give up the location of the Resistance. He knew nothing of any resistance group. The Cardassians did not believe him and increased the interrogations.

Danoel proved to be very head strong and resisted with every bit of energy he had. This made the Cardassians more angry,so they beat him to the point that Danoel prayed to the Profits for help. A few weeks later as he laid in a holding cell cold, shivering and in great pain from untreated broken bones, the Cardassians started pulling out and relief from Bajor started arriving on the Station. Danoel was treated and his bones started healing. He was laying in the infirmary when he heard the news that Star Fleet was going to Take over the Station in a partnership with Bajor and the Station would now be known as Deep Space Nine.

Now at the age of 8, he was to young to stay on the Station so he was sent back to the Temple, he kept up his studies and worked hard under the Kai. He would have many trips back to station and once the Kai died and Kai Winn took office, Danoel had no love for her as a Vedek and even less as the Kai. He moved back to the Station at the Start of the Dominion War, as part of a Training Team in Bajoran Security.

After Star Fleet retook the Station Danoel, made application to the Academy through Captain Benjamin Sisko. After taking the pre-placement test He came in forth on it, meaning he would normally have to try again the following year. But Star Fleet bumped him to the first top pick wanting more Bajorans in the Fleet. He took all his pretraining Classes for the next few months on DS9 working in Ops and then helping in security investigations. Danoel had fully intended to become and security officer. But after talking with the Academy placement officer, He found that he had a strong aptitude for Inteligance and the fleet need good Intel officers. So Danoel left DS9 for Earth and Star Fleet Academy.

Danoel like the Academy, he was reseved well, and he found that he did not have to work overly hard to maintain his grades in Intel classes, but had to work every had in Diplomacy, Command, and Operations. The few Engineering classes he took he was doing very will in, but it was the Intel classes that he really shined in and the Placement Officer had been right. He had been doing this for years and just did not know it.

Danoel meet a few people that he liked at the Academy, one was his bunk mate, James Thorn, a Human. The two got along very well. This was odd for Danoel, as he did not get along with many people seeing how he liked to keep mostly to him self. The two became good study buddies and even went out on a few double dates. James was very much the ladies man, and Danoel struggled with that, but James was able to help him a lot.

At the end of time in the Academy Danoel was sent to finish training at the 118th Fleet Academy Center on Star Base 118. He was then stationed there in the Black Tower.

After graduation Danoel did take some Extended Continuing Education classes, from the Onsite Academy University, for Command and Leadership, so that he would be able to improve his career and move up along the career path. He felt that was important to becoming an department chief inside of Intel.

Danoel, left the Academy and was made an Ensign on Starbase 118 Ops where he was assigned as an Intel Annalist, Danoel would spend his days looking over reports from the Romulan Government and the splintering branches of the Romulan people. This was not a hard job for Danoel, he enjoyed the work at lot and would volenteer for extra duty anytime he could. He found he had a high love for breaking code. It became an obsession for him.

Danoel was in that job for a little over three years. He made it to the Rank of Lieutenant as a rising star Annalist. One September night Danoel was called to the Director of Intelligence Office. He was told he was being discharged from Star Fleet with a Dishonorable Discharge. He was shocked, but soon learned it was all staged because he we being given a deep undercover black ops assignment.

He was placed in a growing Romulan Syndicate, he was there for two years working from the inside to destabilize there terror group. Once the Syndicate was disbanded, Danoel was reinstated as a full Lieutenant in Star Fleet and was made an Annalist again. With the Promotion of Doug Jolly Danoel was made the Chief Romulan Sector Annalist. A job he did for two years and made the Rank of Lt. Commander. He was later made a field agent and placed on the Apollo for nine months to undercover a rogue agent. After his time on the Apollo he was brought back to the Black Towers and made the Chief Investigator for Internal Affairs. Danoel hopes to soon become the Director of Internal Affairs.

Danoel launched on 239302.07 with the crew of the USS Aegis on a mission known as All Time High in codded. One this Mission Lt. Commander Rilem was informed he would be on the away mission to lend a hand. At the pre-briefing he and Lt. Commander Theo Whittaker had some heated talk. Theo vowed to make Danoel's and the Chief of the Intel's life miserable if Danoel with held Intel from him. Danoel came back with you don't want to get on the bad side of an Internal Affairs Agent, not to mention the Chief of Internal Affairs.