The Par'tha Expanse is located slightly coreward and "below" Federation space (or in more scientific terms, along the negative Z axis as one normally views Federation space), at the far end of the Jenatris Corridor. It rests entirely in the Beta Quadrant, underneath the Federation and the Romulan Empire.

There are about 70 systems in the expanse, roughly a fifth of which have inhabitable worlds which are heavily settled. Other systems also have settlements, but much smaller ones: research stations, military outposts, mining facilities, and so on.

The expanse has a large number of temperate worlds within it, and an abundance of raw materials ripe for the mining, including some which are relatively rare in the rest of the galaxy. The expanse economy is booming, which helps the Par'tha lords afford their fine estates and huge luxury cruisers. The expanse has a large population of highly educated workers, and its research facilities rank among the most productive in known space. 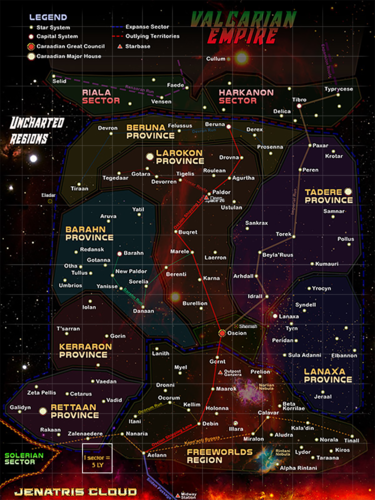 There are two distinct parts to the Par'tha Expanse: the Expanse Sector and the Freeworlds Region. The Expanse Sector is an ore-rich area of space under the control of noble houses - the remnants of the small stellar empire which once ruled the sector centuries ago. It consists of seven provinces which make up specific house holdings. The Sector capital is Oscion, an independent world which, by tradition, is governed by the ruling coalition.

The Par'tha Expanse is a fairly young segment of space, filled with nebulae, gas clouds, and coalescing systems. The many fiery red and ice blue tendrils of intergalactic vapor and gas clouds are beautiful and majestic, but they also make the sector a difficult one to navigate through.

Millennia ago, traveling through space was dangerous everywhere because interstellar space is clogged with dangerous debris. Eventually, navigational sensors and navigational deflectors enabled starships to process data and clear a path for ships through the minutiae. However, some areas of space are so choked with galactic debris and celestial objects that safe space travel is all but impossible. The Par'tha Expanse is so cluttered with debris, stray particles, gases, and such that navigational buoys were constructed to monitor the space lanes.

The Kaen'anti Bypass seems to remain the only truly stable route through the sector. The rest of the Expanse is less stable and safe routes are guarded by navigational buoys at each system. Interstellar drift causes dangerous obstructions to wander randomly on a regular basis, and the buoys monitor the situation and re-calibrate safe routes on the fly. Ships passing a buoy are encouraged to download the updated route data before continuing.

The societies of the Par'tha Expanse are, for the most part, on par with the other major powers of the galaxy, such as the Federation, Ferengi, Klingons, and Romulans. However, they do lag behind in many areas of technological advancements. They lack transporter technology, and their ships are slower and less powerful. However, their vessels are numerous in the Par'tha Expanse when compared to the comparatively limited Federation and Starfleet presence, and many make up for their lack of technological superiority by being designed as brute-force warships. They may lack much of the versatility and efficiency of Starfleet designs, but their single purpose design often makes it a poor idea to go toe-to-toe with them when other options present themselves.

Par'tha Expanse races largely prefer Class O planets, which made Shemsh, a Class M world considered idyllic by most Alpha Quadrant races, less desirable to the native residents of the Expanse. Thus, the crew of the USS Chin'toka was able to negotiate a treaty that saw it become the first Federation colony in the Par'tha Expanse.