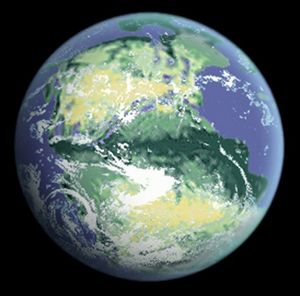 German Dane Galven V aka German Galven, named after his great great grandfather who was brutally murdered by a stray Klingon, was born on Denobula and moved to Earth because of his father's military job, but retired soon after because his strong willed wife whose 1/4 human demanded he switch jobs. Aza Galven is a scientist that studies Quantum physics in which German took a heavy interest in. He researched the early days of such field by reading about Dr. Talia Gershon a research scientist in 2018. On 237710.17 he was unable to help his sister in time when their house crumbled around her and the Borg took her and presumably assimilated her. German loved his little sister and was very protective of her. He always has a picture of Arlil on his person at all times. On the anniversary of his sister's disappearance, his father married a second woman named Stephax. She was the family counselor that helped them through Arlil's kidnapping. Although, Aza approves of her and admires her, German is very distant from her.

Galven's personality is a little different than most. He's somewhat introverted and keeps to himself, but also enjoys the company of others if he feels like conversing with others. He doesn't have the best of luck reacting to situations because of his untimely sister's death. He'll hesitate at first, but then through sudden quick thinking he'll help whatever possible he can do. If his sudden brilliance is more than extreme, he'll just start performing the function at hand with awkwardly, yet smooth motions. Although, smooth isn't in said traits when it comes to someone he likes. Puns are his go to flirting technique. Whether they're bad or good puns.