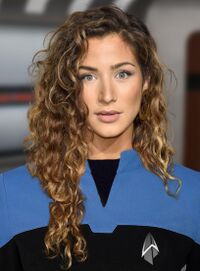 Dr. Eveline Anning is a 30 year old Human science officer stationed aboard the USS Veritas. Born on Earth, Eve spent the first three years of her life in London, England, before her family moved to Aubagne, France. Throughout her youth Eve had been fascinated by history and was a frequent visitor to the many historical sites in the nearby city of Marseille. When not engrossed in a book or in Marseille, Eve would spend her time exploring the mountains that surrounded her hometown, often trailing behind her father and older sister. It was in those foothills that Eve developed a taste for exploration and adventure. After completing her studies Eve felt at a crossroads, and after much deliberation decided that a career with Starfleet was the way forward, following in her mother's footsteps.

Eve’s childhood was split between the nearby city of Marseille where she attended school, and the Garlaban mountain range that surrounded her hometown. Eve was particularly drawn to the rich history of Marseille, and it was this fascination that led her to study Anthropology & Archaeology. Eve completed her bachelor's degree at the Sapienza University of Rome, before going on to complete her masters and PhD.

In addition to her love of history, Eve had developed a love of exploration during her outings into the surrounding mountains, and it was this combination that led to Eve applying to Starfleet.