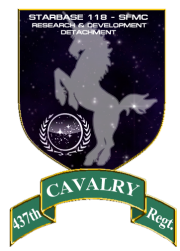 Starfleet Marine Division Research and Development is a division of Starfleet. The Armored Cavalry Maintain facility's on Starbase 118 Tower 7, on Decks 4, 5, and 6 in a refitted Cargo Bay. The Cargo Bay has been outfitted with larger shuttle bay doors for ease of loading and unloading of projects.

Research and Development is responsible for advancing Federation technology and preventing its mis-use while supervising research to ensure it is carried out in an ethical manner. On SB118, one must be a member of Command, Ops, Medical, Security, Engineering, Science or Tactical to have a secondary posting in this division, as it is run by the Marine Division.

Polaron torpedoes are a weapon designed to deliver a devastating pulse of polaron particles directly into either an enemy vessel, which if still shielded, will result in a noticeable drop in shield efficacy or if a ship is unshielded, will disable a ship's systems at random. Whilst not particularly physically damaging and with just two isotones of explosive force (equivalent to a 22nd century spatial charge), the shield damage and system interference of a polaron torpedo make it an invaluable weapon and a key part of the Federation's ship based defense systems.

The system disruption effect is however fairly unstable, for example if you were to fire one at a ships impulse engine, then the pulse could affect any systems within the engine or in a cone spreading out throughout the entire ship, causing anything from a replicator to go offline to a warp core breach. This unpredictable nature of the polaron particles after the torpedoes detonation due to the spread pattern of the torpedo as well as the unpredictable nature of the particles themselves. The polaron torpedo should therefore be utilized only with extreme care in all circumstances.

The Heisenberg compensator is a component of the Transporter system. The compensator works around the problems caused by the Heisenberg Uncertainty Principle (hence the name), allowing the Transporter sensors to compensate for their inability to determine both the position and momentum of the target particles to the same degree of accuracy. This ensures the matter stream remains coherent during transport, and no data is lost. The Compensator is essentially a very sophisticated tracking system, similar in nature to the less advanced sensors which predict the path of objects and allow the Deflector Field to compensate in the most safe manner.

Instead of dealing with microscopic dust fragments, the Heisenberg Compensator works on a molecular level and predicts the sometime erratic paths and spins of the molecules in an object. If even a 1% error were to occur in the Compensator then the matter at the other end of Transport would be damaged, most likely severely, resulting in either death or severe mutilation.

A scan of the Heisenberg compensators, to make sure they perform within the specified parameters, can be performed by raising the Transporter pad. This is because the Heisenberg Compensator must be tied directly into the pattern transfer module, to enable the Transporter to function correctly. They must be maintained in perfect condition and this usually requires a check to be performed every six hours. This component is one that will be heavily carried in spare as it is complicated to replicate and critical to the functionality of Transporters.