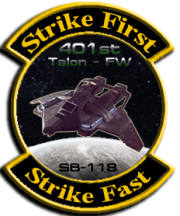 Echo Company, known as the "Raptors" is the former 401st Fighter Wing. The 401'st was merged with the main regiment following streamlining of the corps in late 2392. Now they serve as their own company within the main 292nd Regiment.

As a result of this, the Company falls under the usual chain of command however special dispensation has been given to the CAG Officer of the station in an effort to bring the tracking of all small craft under a single umbrella. As a result, the CAG Officer retains authority during deployment operations near the station to ensure a safe flight-zone with minimal risk of blue-on-blue.

If required, Echo have the authority to commandeer small civilian vessels should they be urgently required for flight and troop deployment.

Echo Company is divided into multiple squadrons based upon the type of fighters:

3 'Argo' Class transport, configurable for either ATV use or troop transport. 5 transports in each;

The older 'Peregrine' model have successfully been cycled out of active operations in favor of smaller, more advanced ships. 2 Squadrons do remain in storage for strategic operations.

Each squadron contains its own personal for both flight ops and maintenance. Despite having their own crews, most personal are trained to operate all types of equipment, and may use other types when needed.

These are a few of the tactical fighter resources both StarBase 118 and the Fleet employ and provides an overview of tactical Fighters and Fighter Classes in use: