From 118Wiki
(Redirected from Wallace)
Jump to navigation Jump to search

A Wolverine variant of a Steamrunner class vessel, the USS Wallace' is currently assigned to patrol hostile areas and explore worlds in Federation known-space. It is based at Deep Space 17. 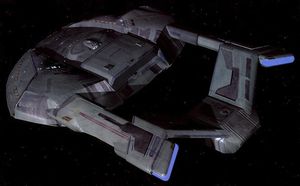 The Wallace is named for the Scottish knight Sir William Wallace(Ref), who famously led a Scottish army against the English, winning the Battle of Stirling Bridge.

The USS Wallace has so far had 2 tours of duty. After transferring to SB118 in 2377, it was commanded by Captain McGregor and then Captain Ross before decommissioning in late 2378. The ship was on standby until 2381 when it was reactivated under the command of then Commander Kare'en.

After sustaining heavy damage during a bombing whilst docked at Deep Space 17 in mid-2382, the Wallace remained at the station for repairs. Very soon after repairs were complete in 2383, the senior crew were transferred to other ships, with almost half transferring to the USS Independence.