Vincent Pierce is an Intelligence officer who is currently in-between assignments.

Vincent Pierce is a tall man of slender, yet athletic build. His short, blonde hair contrasts his deep blue eyes. He has a tattoo of the Starfleet Intelligence logo emblazoned on his upper right shoulder and numerous scars over his body.

Due to his tumultuous past, Pierce sees himself as belonging to Starfleet and is rarely found out of uniform unless it is absolutely prudent. Pierce's constant wearing of his uniform is also due to his ego; when he's off of duty he likes to show flaunt, especially to civilians, his position in Starfleet. 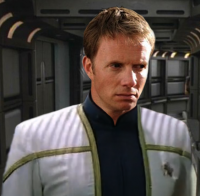 Vincent Pierce was born on the planet Rygel VII on the outer edges of Federation space, colloquially known as the "Frontier Worlds". Pierce was raised by his single mother on a small farm where they lived happily for many years. The life was hard but it was the kind of work that Pierce enjoyed.

When Pierce was around 15 years old, he had expressed an interest in joining Starfleet. His mother was abhorrent to this idea, as she thought that Starfleet was for people who had "nothing else to do with their lives". She felt that working on the farm would be of greater importance than, as she put it, frolicking around the galaxy fixing other peoples' problems.

As Pierce's farm was located right on a large lake, one of Pierce's favourite past times was to take out a canoe and camp on one of the small islands for a few days. In 2383 an Orion raiding party struck his home planet and abducted many of the young people whom he had grown up with, however, his mother was deemed "unsuitable" and was murdered. Pierce returned from one of his canoeing trips and was shocked by what he saw.

Pierce hitched a ride on a passing freighter, where he spent the next few years as a drifter, getting jobs where he could. He eventually fell in with the wrong crowd, which landed him in prison.

After his time in prison, Pierce decided that he would join Starfleet in order to gain some direction in his life. Once he decided this, he moved to Earth and lived in a rather quiet area in southern England. He spent an entire year preparing physically by learning different martial arts and by studying numerous subjects. 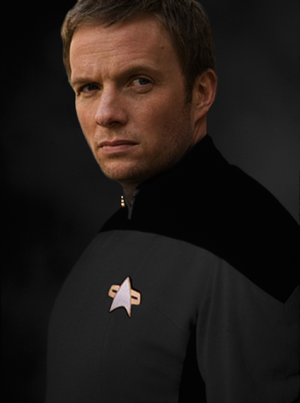 Pierce is a very atypical Starfleet officer, the very embodiment of all that is distrusted in an Intelligence officer. He is dispassionate; cold and calculating. He is the type of man who believes that the ends justify the means and he is willing to do whatever it takes to get the job done.

Pierce is a fiercely principled man. He has even gone so far as to compose a set of rules for personal conduct which he dubs "Pierce's Rules of Life". The rules are not finite, as more are continually added to the list but Pierce makes it a habit to never break his rules. In his own words, "Much like the Laws of science cannot be broken in nature, I cannot break the rules which govern my being." While he is a very principled individual, he is also a man of contradictions. Pierce is governed by a distinct sense of personal honour and integrity which is something that often clashes with his job as an Intelligence Officer. His job often takes him in unknown terrain, and requires him to use dishonourable means to achieve his goals.

Vincent also has a few peculiarities to his character. He is self-diagnosed as having mild OCD (Obsessive Compulsive Disorder). His quarters and every one of his work environments is incredibly well organized. He has a specific place for everything and the placement of objects on his desk is aligned to an invisible "mental grid". His diet is also very strictly regimented. He has eaten Waffels with assorted fruits and maple syrup for breakfast every morning since his first year at the Academy, breaking his habit only when forced to do so. On each day of the week, Pierce had a different meal in order to maintain a balanced diet but the meals are ordered in a sequence which repeats every week. Pierce has even programmed the meals into the replicator as "Monday lunch" and "Wednesday dinner" for each day of the week.

Another peculiar habit that Pierce has is that when he is alone he commonly talks to himself. As he is a completely sane individual, he doesn't have conversations with himself but he will sometimes audibly remind himself of things or brainstorm aloud even if no one is present.

During his time in prison, Pierce developed a somewhat unhealthy paranoia; believing, probably rightfully so, that there is now more than one person in the galaxy who wants him dead. As such, he carries a type-1 'cricket' phaser with him wherever he goes. It is the only things he does that is against regulations.

Pierce's Flute, a replica of those used in the classical era, his favourite era.

Most officers, especially in the Security and Intelligence field, spend a lot of time on the holodeck and in the gym. Pierce, while he does enough to stay in shape, is usually busier with other things.

When Pierce met then-Ensign Sundassa Faranster, a woman who was at one point a friend of his, she had with her a musical instrument. Pierce had been exposed to music before but it was always just supplementary background noise to him. When she played her instrument for him, he became incredibly interested, partly because of the instrument and partly because of an initial attraction he felt for her. Pierce performed later research on music and fell instantly in love with the classical music of Ancient Earth. He decided that he wanted to play music himself, so he replicated what had quickly become his favourite instrument: the flute.

The death of Pierce's mother was something that hit Pierce very hard. Not only was she killed, but most of the people inhabiting Rygel VII were kidnapped as well. All of these atrocities were committed by Orion slavers. Due to that, Pierce has harboured a fierce hatred for them, the kind of hatred that can only be described is racism. His racist feelings towards Orions is something that Pierce is trying hard to correct, especially since his encounter with Sherana.

Pierce's encounter with Sherana was a catalyst for his decision to learn about Vulcan philosophy, specifically as it relates to the suppression of emotions. Pierce approached the chief of security on board the Apollo at that time, Lieutenant T'Mar. Initially she helped him with basic meditation techniques and he continued with regular visits to her.

Pierce moved to Earth in late 2385 where he prepared for his entrance exam into Starfleet Academy. He failed in his first two attempts to gain entrance to the Academy and almost gave up when finally, after his third try, he was successfully admitted. Pierce was an average student at the Academy, he excelled in history, did well in military tactics and received good grades in piloting. The sciences, while he found them fascinating, were almost beyond his comprehension. He only barely passed the chemistry finals, with his Academy friend Lon Tunor, a Betazoid. Vincent wasn't an especially athletic person, however he excelled at martial arts. Winning two championships in his years at the Academy, accomplishments he is very proud of.

Pierce originally only took a minor in Intelligence at the Academy as a way to compliment his security major. His primary training is as an Intelligence Analyst; he gets the raw information gathered by various means and compiles it in solid, usable intelligence for his superiors. 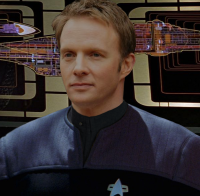 A young Ensign Pierce, fresh out of the Academy

Vincent Pierce was older than most people when he joined the Academy, as he was already 21 years of age. He had failed at his first two attempts to gain entrance into the Academy until he finally made it in on his third attempt.

Pierce put a good amount of effort into his years at Starfleet Academy, however he was, and never intended to be, the "A student". His first year at the Academy was tumultuous, at best. Having spent too much time socializing, he almost failed his first year, not to mention developing a rather horrible rapport with his chemistry and mathematics professors. In his second year, he really pulled up his game. Although he found the sciences very interesting, he found the actual classes overwhelming; filled with concepts wholeheartedly alien to the young man who had grown up on colonist's world on the edge of Federation Space.

Pierce's third year was wear he really began to shine. He pulled his marks up drastically, receiving good grades in military tactics, intelligence gathering, history, and did relatively well in piloting as well, however he did realize that the pilot's seat was not somewhere he belonged. He also took up martial arts, and won the Academy-wide championship, an accomplishment he is very proud of.

In his fourth year, Pierce tried his best to retain the good grades that he received in previous years, which ended in him actually doing better in Intelligence, his minor, than Security, his major. While he did quite well in Intelligence, as well as gaining the favour of his professor, he never actually wanted to be an Intelligence Officer, or as he terms them, "spooks". Fate, it seems, would have a different plan for him.

When Vincent Pierce first arrived on the Apollo, the crew was wrapping up a mission on the planet Quatal minor. His only assignment during that time was to assist in the recovery of a crashed shuttle and his actions in doing so, and in successfully integrating with the crew, resulted in a promotion to Lieutenant JG.

The Apollo's next mission was on the planet Izar, where the crew was taking a break for shore leave. During that time, the senior staff were taken hostage along with a number of other civilians at one of the major hotels. His friend at the time, then-Lieutenant Sundassa Faranster, was next in line in the chain of command. Vincent saw her as a doctor who had insufficient training and capabilities to deal with the situation so he, on numerous occasions disobeyed her orders and tried to undermine her authority.

His actions on Izar completely destroyed any possibility of the two officer's developing and friendship and it also severely damaged his reputation throughout the ship. Most of the crew didn't trust him after that because while his actions could have been excused individually, the sheer amount of things that he did could not be excused.

The only person who retained any faith in the man was his captain, Andrus Jaxx. Jaxx saw a potential in Vincent that no one else saw and rather than punish him with a demotion or a reprimand, he Vincent was promoted to the rank of full Lieutenant. Jaxx's reasoning was simple, if Vincent were demoted than the expectations of him would drop as well, however, with a promotion, the expectations of Vincent would increase considerably and his desire to succeed would hopefully lead him to live up to the potential that Jaxx saw.

Missions on the USS Apollo