Sherana is the Botanist and "mother of the Arboretum" aboard the USS Constitution-B, she also works part-time as Security Officer in the Inter-Species Exchange Program with the Klingon Empire. She does not acknowledge her given surname, as she is not connected with her Orion heritage. Therefore she introduces herself only as Sherana.

Saryn Caelin has been born on Orion and was raised to be prepared for being a slave, to be sold when her time came. This was exactly what happened. An Officer of the Orion military Olan Pasel bought her from a trader. He took her with him onto his assignments. One of them led into Battle with Klingons. His ship was captured by those Klingons and the whole crew was killed. When they went through the ship for loot, the one who killed Olan also found his belongings, among them Saryn, who was quite advanced in pregnancy at this time. Despite his orders to kill everyone on board, he took her with him and into his home, although Saryn had been scared of him. 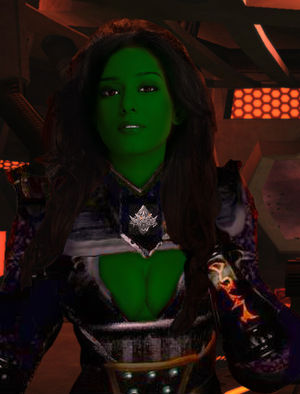 Sherana was born a bit more than a month later and by the time she was 8 Sayln was a changed woman and she and Grawn married. Well not everything had changed, she still had her upbringing and tried to teach Sherana everything that she had learned, but also Gawn, who treated her like his own, taught her Klingon life. So she learned to fight and to serve. Visiting the Klingon Academy went without saying for the girl, brought up and taught by her father the way of a warrior. She did not really understand much of the Orion teachings of her mother and soon saw herself more as a Klingon than an Orion.

At the age of 13 she went through the First Rite of Ascension as any other Klingon Child, becoming officially an Adult. She had just celebrated her 20th birthday when the Second Rite of Ascension followed which made her a full warrior.

She joined the Klingon Forces after finishing the Academy, constantly showing that she was more than just a slave girl in a costume. Those who worked with her longer did not have to be convinced, only those who never met her before could hardly believe that she belonged there until she prove it to them. She climbed the ranking ladder up with her abilities and loyalty up to the rank of Sogh (Lieutenant). On many assignments she lost comrades, but one of those assignments will always stand out. She was stationed on the IKS HoS with some of her lifelong friends and she lost all of them. For a successful mission and her survival, she was promoted to Lieutenant. She never told anyone in which situation her comrades were lost, but that they were on duty, so they would remain honored. But she did not get quite over the loss. Once she was healed again she told her parents that she had to leave and they let her go, to find her own way to deal with the situation.

Sherana in 2393 at the Family Reunion party

Leaving with Traders she visited quite some planets, staying here and there for a little while but then stayed on Earth. Finding some peace in nature she kind of fell into training right there, without searching for it. But she missed being on ships and after months of beating herself up about it, her Mentor suggested a position as Botanist to her on a Federation Vessel. It took several applications through a period of two years until she finally got an acceptance letter and landed on the USS Apollo where she would take care of the Arboretum.

As the crew relocates to the USS Constitution-B, she follows to serve under a new CO on a new ship. In 2396 Sherana was accepted into the inter-species Exchange program and now works part time as a Security Officer under Lieutenant Yito Seja, and part time as Botanist in the Arboretum. During her time in Security she is Lieutenant Sherana in full Klingon Uniform. As Botanist she works as Civilian.

For seven years she was in a romantic relationship with Tal Tel-ar, which ended in 2397.

She has only a few friends, but those she treasures in her own way. Her friends include Solaris McLaren and Pepper O'Grady, both live and work on Starbase 118 OPS.

Through her upbringing on Qo'noS Sherana had broken bones, contusions and other injuries from her training and every day life among the comrades. 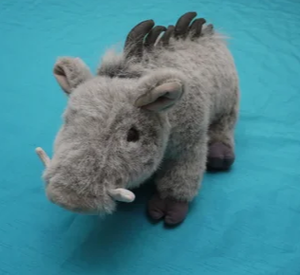 As all Orions a gland located at her hypothalamus emits pheremones. Usually she has it under control with a drug called verratropine, that controls the production of the pheremone. But it can happen that she forgets about it, since it is rather new to her that she has to take it and old habits do not break easily.

Since she cannot have a live grown Klingon Targ as her pet on the Constitution, she has a substitute. Her plush Targ paw'. He is hidden in her bedroom and nobody gets to ever see him.

Enjoys various Klingon Dishes and beverages. She tries dishes from throughout the galaxy as well but has tendencies towards dishes including meat. She needs her Raktajino in the morning.