Taryn Slater is a Tactical/Security Officer, currently serving her first tour of duty aboard the USS Veritas. 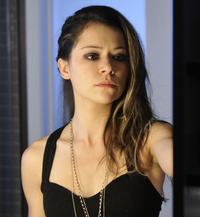 Exotic. That’s the word that best describes Taryn’s personality. The kind of person to be found spontaneously breaking into song and dance, she finds it very easy to get lost in the excitement of the moment, a quality which has, from time to time, landed her into trouble, as her Academy disciplinary record, marred by a myriad of minor offenses - mostly breach of protocol, can attest.

She’s also very much a social creature, never turning down a gathering, a party or basically any sort of activity that promises some good times with good friends. She is often talkative and witty, and rarely runs out of things to say. She truly does enjoy being around others and has a natural curiosity to understand others’ perspectives.

Taryn is driven by a strong desire to experience everything there is to experience, never hesitating to step out of her comfort zone for a new thrill. That desire spills into every part of her life, and it could be said that her very decision to join Starfleet, despite her father’s troubled experiences in the past and pleas against it, was driven by this desire.

Strongly emotional, she is very vulnerable to criticism and may sometimes react badly to negative feedback, which can make addressing her weaknesses difficult sometimes. That, combined with a natural aversion to conflict might make her act standoffish and dismissive of any criticisms at times.

Taryn Slater was born in 2372 at the University Hospital Galway, the first child of Thomas and Susan Slater. At the time, her father was a computer engineer and her mother a nurse, but everything changed with the dawn of the Dominion War. Thomas, despite his wife's protests, enlisted in Starfleet in 2373 to join the war effort.

In 2374, appalled by the horrors of war, Thomas deserted his post and returned home, but was soon found. As a result, he was inprisoned for a period of four years. During this time Susan and Taryn remained home, in Galway. With Thomas release, in 2378, the family retired to the countryside, where Taryn's father took over his family's sheep farm.

Despite the turbulent beginnings, Taryn grew up in a rather provincial setting, though she always yearned for more. She was always the one looking up at the stars and wondering what mysteries they held. Her desire to see the universe only grew stronger, and despite her father's experiences and lack of support for the idea, she had already decided at the age of 12 that she wanted to become a starfleet officer and see the universe.

Her enthusiasm was such that in the summer of 2387, when she heard that a Starfleet officer, who had family in the county, was visiting, she simply walked up to the family residence, knocked on the door and asked if she could get a letter of recommendation for the Academy when the time came. The officer in question, Commander Carrie Lind, refused it, but was so taken by Taryn’s boldness that she decided to mentor her.

That proved to be essential as Taryn`s adolescence began to turn rebellious. Bored with her surroundings and resentful for the lack of support from her parents, she started to get into trouble, picking fights with others and damaging property. Lind`s guidance, however, helped ensure that it was just a phase, and keep her rebelliousness in check.

In 2390 she finally took her Academy entrance exam and passed, though she was literally the lowest scoring candidate to be accepted into her class.

Despite a turbulent start, Slater eventually came to be somewhat admired by the faculty. Despite her somewhat undisciplined nature, she proved herself to be a very capable leader. According to a number of student leaders, Slater was directly responsible for the success of at least four different cadets, who were on the verge of failing classes until she began mentoring them in select subjects. Her disciplinary issues were somewhat mitigated during her sophomore year, as she started to get more involved with the Cadet Corps. In addition to taking up sports (namely boxing and volleyball), she started to take interest in cadet leadership, which eventually led to her being appointed Cadet Ensign during her junior year, responsible for a Sophomore squad and finally being promoted to Cadet Lieutenant Junior Grade in her senior year.