Lieutenant Commander Sabrina Holly, is currently the Deck Officer aboard the USS Athena.

Genuinely cheerful and friendly, Sabrina is quick to ignite new friendships and rekindle old ones. Sabrina also is developing an increasingly bad tendency to fall hard and fast into romantic relationships. Sabrina is also a massive klutz and has a tendency to run into people.

Sabrina's Ambitions and Goals revolve around her getting married, having a family, and making Captain. She wants to run her own ship and bask in the reality of making a name for herself.

Sabrina loves her parents very much though things have been a little strained since Sabrina left for Starfleet. Sabrina's parents had a big falling out before she left and though Sabrina didn't know what the fight was about at the time, she felt that it put a strain on her parents relationship with each other and her. She has spoken to her parents a total of once since she left for Starfleet, and it was during that discussion that she learned of her half-sister Veena Zox and the reason her father didn't want her in Starfleet.

Sabrina was born and raised on Starbase 118. She has seen more than her fair share of aliens and humans alike and has acquired a fascination with starships, dabo, alcohol, parties, and learning. As a kid Sabrina learned both Ferengi and Klingon and was fascinated by the rules of acquisition so much she memorized them all and Klingon culture, developing a love of Raktajino and Klingon Martial arts. When Sabrina was seventeen, she headed for Earth for early acceptance to Starfleet. Once there, she double majored in Engineering and Tactical. However, to her that still wasn't enough so she stuck around long enough to once again double major in Helm/Navigation and Com/Ops. Now with knowledge under her belt and her youth behind her she made her way to DS26 to meet up with the USS Atlantis.

Not long after finding her now former boss, Lt. Gwen Gardener dead in Engineering of the USS Atlantis, Sabrina took it hard. Now with yet another door closed and a friend lost, she found her way to DSX to meet up with the USS Constitution-B just in time to be placed on the newly launched crew of the USS Doyle-A. With the Doyle and her crew Sabrina has seen a lot she hadn't been expecting and gone through a broken engagement, now Sabrina takes on the biggest career move of her life as she is reassigned to the USS Athena as Executive Officer.

She mostly stuck to the background and it wasn't until her assignment to the Doyle she actually started being active on away teams and such. 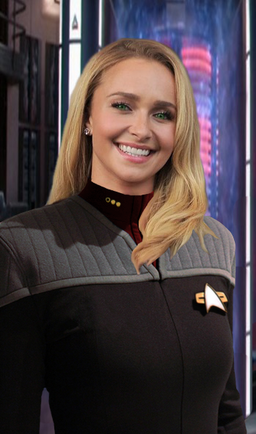