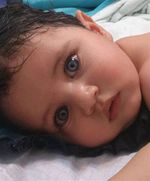 Natalia's life began during the evacuation of the Veritas. When the escape pod landed, her mother had gone into labor. She was delivered on the surface of the M-Class moon the crew had named Limbo.

Due to a time dilation effect on the moon, Natalia spent the first six months of her life being raised in very primitive conditions.Also due to the effect of time in the localized area of the moon, she is six months older than the galactic standard.

While the conditions were primitive on Limbo, there was no lack of love or care from crew of her surrogate "aunts" and "uncles". 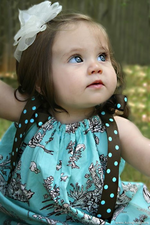 Natalia spent the bulk of her life aboard the Veritas. She is truly a child of Space like her father.

Made from discarded scraps of a uniform and bird feathers, Wimbo was made by Wil Ukinix on Limbo and served as Natalia's first toy. Once they returned to the ship, Raissa had it stuffed with more conventional materials. Later on, Ukinix modified a commbadge to play lullabies when pressed. Wimbo is currently Natalia's favorite toy.

Natalia received this as a gift from her father Jansen Orrey on her first christmas on Earth. One of her mainstays on her bed.

The Holographic Muppet Teller Mark I is a custom holomatrix developed by Geoffrey Teller as a gift to Natalia on the occasion of her parents wedding. Visually styled after an antique childs toy, the HMT looks, moves and acts like the muppets on which he is based. His behavior is equally exaggerated and, among other features, the HMT can burst into complex musical numbers with accompanying orchestral instruments, tell bedtime stories with complex visual effects and deliver hugs on demand. In addition, the program has a number of child safe features such as basic medical & emergency training and, in the event of a water landing, can be used as a holographic flotation device.