Born in New Berlin on Luna, Montague had from an early age an advanced wanderlust that spurred him on to explore as much culture and caused his wonder of the stars. One of his first experiences of new cultures was the annual Mazurka Festival of Polish culture. Growing up he devoured all information he could get on any and all the different people, and cultures he could throughout his early formative years.

As a teenager Montague spent nearly as much time staring at the stars and the comings and goings of ships from both Luna and Earth as he did studying. He continued to dream of the ultimate journey into that great starry void. He continued to experience as much as he could as his family moved to Copernicus City. On weekends he would continually take day trips to Tycho City, Lunaport, Lake Armstrong and countless other places along the lunar landscape.

As soon as high school ended for Montague he took his first large adventure and moved to Earth. For several months he wandered the world taking in what sights he could until he finally settled in the city of Nairobi where he enrolled in the university there as the next big adventure for his life. However it would be a very short adventure indeed...

As a first time law student Montague worked hard to keep himself focused, specializing in studying times when United Earth, and Federation, law collided with the laws and cultural practices of alien species to feed his wandering eye. Until the Caravan came to town. The Caravan, a ship of circus performers that came into the city to perform for two weeks. On the first day Montague got entranced by a Caitian dancer and fortune teller named Taj. Every day of the next two weeks Montague was there truly dumbstruck in the way the troupe acted and interacted with so many people of different backgrounds.

Montague sent as much time as he could in every show, to the point that some of the performers began to recognize him. As he does, Montague began making friends, including the fortune teller that had robbed him of his good sense that first day. When the final day came though Montague was throughly surprised when Mr. Blackwell, the ringmaster and owner, offered him a job with the crew. Montague accepted on the spot and by lunchtime had left university and packed his bags in to help finish the day learning some of the small jobs as well as helping to tear down the tents and load the ship to leave.

Life on the Blackwell 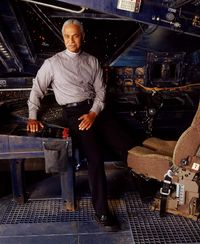 Montague on the bridge of the Blackwell.

Once on the Caravan Montague was quick to make friends among the diverse crew. Including Mr. Blackwell, the captain of the caravan and the ringmaster of the show. Montague adapted quickly to the job of setting up the stages and guiding people through the different shows and acts. About a year into his time on the Caravan Mr. Blackwell passed away just as the ship came into the Denobula system. In his will he left the Caravan and the show to Taj, his adopted daughter. As her first act as captain Taj reregistered the Caravan as the Blackwell in his honor and named Montague as her first mate.

The year that followed had the Blackwell performing all over the core worlds, and a growing relationship between Taj and Montague. On the anniversary of the death of Mr. Blackwell the ship's schedule brought them back to Denobula and Taj to a low regarding the death of her adopted father. While they had been growing closer and closer over the year of working together, including a stint on a couple planets where a heavily makeup covered Montague was the "Animal man" pet of the mysterious fortune teller(much to the children's delight when he approached), Montague took the moment and proposed to Taj. She accepted and they were happily married that evening after the show closed for the night.

After a long stretch of happily married life and running the Blackwell's show, including the adoption of their children, Montague was still seemingly missing something in his life. After many days of talks Taj herself suggested that Montague join Starfleet. After a bit of thought and consideration, as well as talking with the eldest three children, Montague did indeed enroll in Starfleet academy in the Diplomatic Corps.

While at the cosmopolitan main campus of Starfleet Academy Montague enrolled in the Diplomacy program specializing in Cardassian relations. As his studies began he made fast friends with his roommate, and fellow diplomatic student Brek, who was studying Romulans. The two shared many a long night deep in debates, both mock and real, about the various policies and politics that were discussed in the days teaching. It is a friendship that Montague still counts highly.

As a Diplomatic Aide in Starfleet Command Montague distinguished himself by working for all the ambassadors, even helping his direct supervisor in a couple of small off world claims. Reports from his former roommates postings trickling down the grapevine stoked the fires in Montague again and he placed his name on the listing to be assigned to a ship.

Montague's first assignment away from Starfleet Command was to the newly launched USS Darwin-A, a Horizon class ship assigned to the Zeta Gelis Region on it's first mission to the Romulan colony of Talvath.

As the Darwin reached the Trilithium resin ravaged planet of Talvath, Montague was there to receive the Governor and his staff as they beamed aboard the ship. Once the uncomfortable process of having the poison process out of his system was over Montague showed the Governor to first his quarters then to the ship's lounge where they began to discuss the methods the ship was using to clean the atmosphere of the planet. It was here that news reached them both simultaneously about the betrayal of the Governor's Aide and his attempt to over take the ship. Montague vouched for the Governor in having been with him the whole time. They weathered the storm of suspicion and the verbal assault of Ensign Necessity James to see the rescue of the planet and the siege of the Darwin to a successful conclusion 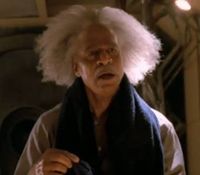 Following the resolution of the issues on Talvath Montague was reassigned to the space station Deep Space Six. Where he helped in a general capacity to fulfill his role as a mediator and general problem solver. However it wasn't long until his itch to be traveling once again took hold of him and he put in for a transfer to the USS Atlantis within the Par'tha Expanse.

Montague finds himself on the Intrepid class USS Atlantis as it transports a Grenushi ambassador to Krayav for important peace talks. However things are rarely as simple as they seem Settling into his new offices and with the help of two assistants Montague.

A Tale Of Two Worlds

While he joined the ship a bit late to be involved in the mission proper Montague went to work straight away, questioning a member of the EJS terrorist group in the brig with Commander Tracey Townsend before making sure to be among the first to beam down to the surface of Uzoka 4. After a ceremony, that Montague barely listened to(his itch to explore the new world keeping him from concentrating) before taking to the streets in pursuit of culture and a feel for the Krayav species before beginning to attend the peace talks the next day. What he found on that first night was the group of Sarah Talens, Emerson Ravenscroft, Tamaiti Scott, and Rendal Rennyn inches from a bar fight after

Painting bought by Montague on Uzoka 4.

forgetting to pick up their allocated local currency before leaving the ship. Taking the diplomatic way out and smoothing things over Momtague enjoyed a brief night out with them before returning to the ship.

Using his shore leave to attend the peace talks Montague saw a solid foundation for further talks made, including a temporary ceasefire ordered by both sides. During a break from the talks he did manage to take in some of the local culture and purchased a pair of paintings at a street bazaar. One he immediately put on display in his office, and the other he had prepared for his art collecting academy friend Brek.

Main office of the Diplomatic offices.

Located on Deck 4 of the Atlantis, the diplomatic office consists of two rooms. A main office, and a larger conference room off to one side through a glass door.