Lazarus Davis is currently serving as Chief Science Officer aboard the USS Constitution-B. He often finds himself at odds internally: the inherent conservatism of a scientist juxtaposed with the pointed irreverence of a creative mindset. Lazarus' personality profile has correctly identified him as an agent provocateur, but he wishes the file would emphasize his good-natured attitude, as the term can carry a negative connotation. Lazarus is easy to get along with, and thinks unique experiences of all kinds are the spice of life. His sense of humor is dry and deadpan, which can make him hard to read. He can appear adept in social settings, but stumbles more often than perhaps most do and can be a bit garrulous at times.

As of 240001.14, Lazarus Davis is Missing In Action, and presumed to be inhabiting an alternate quantum reality when he switched places with Azura Ada. 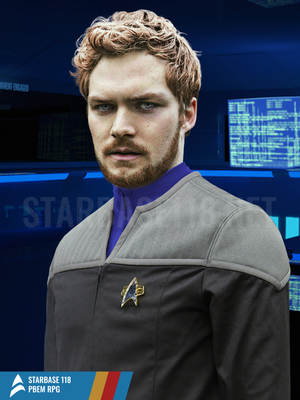 En route to confront a subordinate for endangering the crew with an unsecured specimen.

Queen: Lazarus' wife, a Linarian expat he met on Xatrac City. The two colluded to a sham marriage to allow Queen to break a contract that doomed her to a life of wage slavery. However, in time, they have grown to first respect, like, and maybe even love each other.

Ravenna Carter: Fellow science officer aboard the USS Constitution-B. The two bonded quickly after Ravenna's arrival and subsequent work on their first mission together. Ravenna is Lazarus' best friend on the ship, and confidant.

Davy Jones (2364-2395): Childhood friend from Earth. The two of them were closer than brothers during their formative years and beyond. Jones was a major positive influence on Lazarus, always encouraging him and pushing him to be a better person. Lazarus is a bit lost without him.

Lazarus “Juice” Davis was born Justin Davis. At the age of 16, after surviving a harrowing medical trauma, he felt that his purpose in life was renewed and thus gave himself a new name – borrowing from a biblical story of a man resurrected. His friends, however, still call him by his nickname: “Juice.” His parents oscillate between Justin and Lazarus. Lazarus went through high school and his undergrad experience because it was what he was supposed to do, but the aforementioned medical trauma during his undergrad helped Lazarus realize that life is precious and perhaps too short to simply go with the flow. Against the objections of his parents, Lazarus pursued a PhD in cognitive science where he explored his interests in psychology and effects of media use.

After his time in academia, Lazarus found himself empowered like never before. He chased a dream that seemed so improbable before - a doctorate! - that he then felt like he could tackle anything. So he enrolled in Starfleet Academy. He found the experience equally rewarding and challenging. Learning to be a science officer was a fun, new challenge. After being so steeped in the social sciences, having a chance to learn so much about the physical sciences was exciting. Plus his expertise as a research psychologist offered some unique affordances as a science officer. Much like how a chemist could aid the Chief Engineer refit the warp drive to run on something other than dilithium, Lazarus' understanding of the humanoid cognitive systems could prove beneficial to the ship's medical practitioners, as well as first contact missions, and understanding alien communication.

The distinction between clinical and research psychology is opaque at times. In fact, there's plenty of friction between clinical and research psychology because clinical psychology focuses on treating abnormal minds, whereas research psychology is heavily focused on understanding and describing nominative conceptualizations of the mind. Lazarus is solidly a researcher, with no medical aspirations or abilities (beyond the Academy basics). A medical doctor, counselor, and a scientist are coming at the topic of the mind with radically different lenses and with fundamentally different goals. But that's the beauty of it: together, the different perspectives may form a greater whole than the sum of their parts in terms of understanding the mind. These opportunities excite Lazarus.

In his spare time, Lazarus is a songwriter and composer, as well as an avid music listener. His view of music history is genealogical in that he sees a clear lineage in his musical preferences to a series of late 20th century Earth musicians and composers. Lazarus also dabbles in writing holoprograms that live between typical holonovel-conventions and art.