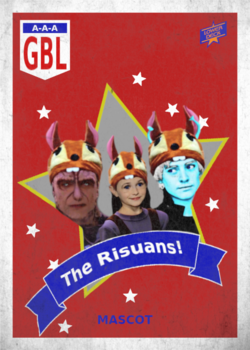 Geleth was born on Ithic II as the daughter of Ria and Taril Zantett. She was named Geleth in honour of Ria's mother, and Aski in honour of the woman who adopted Taril decades earlier. Despite their heritage and the distance to Cardassia Prime, Geleth's mother and father - both Bajoran/Cardassian hybrids - understood themselves as Cardassians and raised their daughter accordingly. The family lived a peaceful life until a group of unknown individuals attacked their farmhouse and killed both Ria and Taril. Geleth managed to hide and was brought to a children's home on Cardassia Prime.

There, Geleth met Ferri Emlott, a young woman investigating Taril and Ria's death. Ferri left Geleth with the promise of finding her someone who would take her out of the children's home, and her promise came true when Geleth was adopted by her aunt Trovek Arys and brought to Starbase 118 to live with her and her partner Lukin Zorkal.

Those who knew Ria Zantett, Geleth's mother, would describe the girl as a younger version of the now-deceased woman. Her petite build makes her appear more fragile than the average Cardassian child, and both the Bajoran and Cardassian features are muted. Geleth inherited her father's deep blue eyes and her mother's smile.

She is usually seen carrying a pillow or some kind of plushy around with her.

Trovek Arys is Geleth's aunt. Geleth is, at times, still a little apprehensive of her - mostly because she isn't Cardassian, and doesn't act Cardassian either. The trust between Arys and Geleth is fragile, the little girl knows that Arys cares about her.

Lukin Zorkal is Arys' partner and Geleth's father figure. Even though he is strict with her, Geleth loves Lukin and wants to be like him when she grows up.

Ferri Emlott is like a sister to Geleth, and the two spend a lot of time together. Geleth doesn't quite realize that this isn't helping Ferri to progress her career, and is simply happy that she has someone who plays with her when Lukin and Arys are busy.

Geleth suffers from an abnormality in her lungs - pulmonary nodules caused by an unknown chemical. She is currently in treatment and will have surgery later on.

Geleth is adopted by her aunt Arys.

Geleth and Ferri are kidnapped by Trovek Aaron, Arys' brother. As he throws Geleth into a lake to let her drown, Ferri jumps into the water to save her.