Ensign Cassandra Mason, MD is currently serving as a Medical Officer aboard the USS Arrow. Fresh out of Starfleet Medical Academy, it is her first station aboard a fleet vessel. Her expertise is in Neuroscience however, her love of her job has led her to develop skills in various medical practices.

Due to the high stress she puts on herself, and the stress that comes with intensive training to become a doctor, Cassie has developed some compulsive behaviors; organizing, color-coordinating, as well as other minor anxious habits. It is because of her need for organization and neatness that she can be rather finicky in details, as well as be perceived as "high maintenance." However, her acute eye for detail can be a blessing in her line of work. 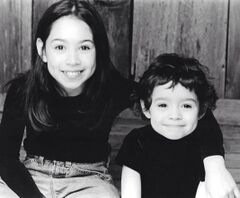 As a result of the Cassie's moms being a same-sex couple, all three of their children are adopted. On several occasions, Cassie has credited her desire to become a physician to her mothers and their dedication to their work as well as the health of their own children.

All three siblings attended Marilyn Highland's Preparatory Academy, a renowned private school in their home town. It was at this school that Cassie was often overlooked by her other classmates because of her timid nature. Constantly nervous, Cassie's only satisfaction came in the form of her school work.

Despite her goals of wanting to be a physician, Cassie did not always see herself working for Starfleet. It was her first year of college and the break up with her fiancé that inspired a change of plans. The more she focused inwards, the more the shy bookworm in her desired adventure and travel. As soon as the thought of Starfleet crossed her mind, the more it seemed like the only option.

Life at The Academy

Cassie spends most of her free time reading. Her favorite genres are fantasy and science fiction. Poetry, from Earth and other Federation planets, is also one of her favorites. Her love of reading and sewing skills inspired Cassie to become interested in the skill of bookbinding, a unique and antiquated hobby that she considers just as valuable a skill now as it would have been centuries prior.

Knitting and sewing are also favorite pastimes because the repetitious motions can be calming for someone as high strung as Cassie. She also enjoys gardening, though hasn't been able to do it much while in the Academy and now aboard the Arrow.

Growing up with a child therapist as a mother, Cassie was taught early on to learn breathing exercises and remain calm, something that would later go on to help her in frantic medical situations. It also sparked a life long appreciation for yoga. Occasionally, Cassie will enjoy hiking, though she's always sure to bring a fully equipped Medkit in case of emergencies. 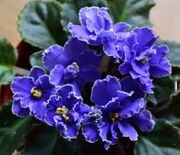 Gerald - African Violet
Cassie resides in a single occupancy room on Deck 3 (Room 03-004) onboard the USS Arrow. Decoration is sparse and most of the room is taken up by her library of books.

Gerald: Gifted to her after graduation from the Academy, Cassie's African Violet was the first decoration placed in her quarters once assigned to the Arrow. She's extremely fond of the little plant because it reminds her of her mothers' garden surrounding her childhood home. She's affectionately named it Gerald. It's one of the only non-book related decorations she's accumulated thus far.

The first book Cassie bound while onboard the Arrow.

Hand Bound Journals: Like any true book lover, Cassie prefers traditional pen and paper for most things, including her personal journals. Which is exactly why she needed a new one to commemorate her first duty posting as a member of the 'Fleet. Always one to take matters into her own hands, Cassie put her skills to use and designed a space themed leather bound journal with her mother Rin's zodiac constellation.

Cassie's quarters on board the Arrow
Knitting Supplies: While she hasn't had much time to begin such an ambitious project, Cassie hopes to be able to take up knitting again and hopefully complete a blanket. There's no real need for one when the climate controls are so easily adjusted onboard the Arrow, but there's nothing better after a long day than to curl up with a book. Even better if it's under a blanket made by your own two hands.

Personal Medkit: While it's not necessary, Cassie keeps a personal Medkit in her quarters. Should there be an emergency that requires immediate attention, Cassie knows that it would only waste time should she need to go to Sickbay to retrieve a fully stocked kit before arriving on the scene. It could be her compulsive tendencies that make her check it every morning before she starts her day, but she likes to think it simply means she's prepared to do her job.