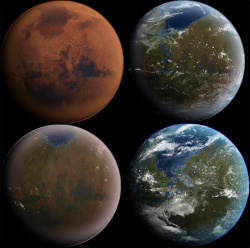 The process of terraforming Gambtian III.

Due to the lack of transporter capability around Gambtian III The Federation decided to not use the plant for new colonies, but instead uses the Planet for a Maximum Security Prison, a Prisoner of War Camp, and a Few Federation Top Secret Project Offices. It has been rumured that Section 31 likes to Operate from Gambtian III, but all investigations into this has come back negative.

Terraforming Gambtian III would entail three major interlaced changes: building up the atmosphere, keeping it warm, and keeping the atmosphere from being lost to outer space. The atmosphere of Gambtian III is relatively thin and thus has a very low surface pressure of 0.0059 atmospheres and a pressure of 0.003 at the top of Tagues Mons ; compared to Earth with 101.3 at sea level and 4.0 at an altitude of 22 km. The atmosphere on Gambtian III consists of 95% carbon dioxide, 3% nitrogen, 1.6% argon, and contains only traces of oxygen, water, and methane. Since its atmosphere consists mainly of CO, a known greenhouse gas, once the planet begins to heat, CO may help to keep thermal energy near the surface. Moreover, as the planet heats, more CO should enter the atmosphere from the frozen reserves on the poles, enhancing the greenhouse effect. This means that the two processes of building the atmosphere and heating it would augment one another, favoring terraforming.

The tremendous air currents generated by the moving gasses would create large, sustained dust storms, which would heat the atmosphere

Artificially creating a magnetosphere would assist in retaining the atmosphere.