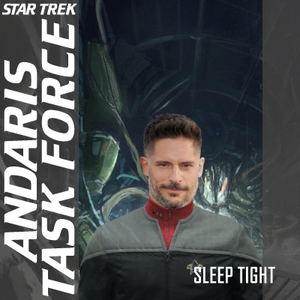 The Darwin had finally arrived at Deep Space 26 along with the other ships of the new task force. During the time for personnel exchange and ship upgrades all comtraffic stopped from SB26. Taking charge LtCmdr Brell called for a quarantine, arrived on the bridge and transferred some officers from other ships. Brell then called a meeting to explain the situation to the rest of the senior staff. A large plant is growing inside the station extending its tendrils all across it, and for all intents and purposes it appeared that everyone on Star Base 26 had fallen asleep.

Cmdr Thomas, LtJG Lambert, Lt Shayne and Ens Logan were to go to the Starbase to looki into the plant spreading unchecked and find out the extent of the effect on the starbases systems.

Brell, Lt E’riQ and Ens Kell were to secure the station and attempt to regain control of ops.

LtCmdr R’Ven, Lt Pond, Ens Hikaru and Ens Jora were to investigate those who were put to sleep, find out what caused it and how to revive them.

Lt Lahr and LtCmdr Stennes were to coordinate with the duty officers on the rest of the task force to make sure no ships break the Quarantine and act as a hub of for the incoming data to make sure teams have as up to date information as possible.

R’Ven took his team, and after asking his opinions split his team in two. Hikaru and Jora were to go to the conference and check on the Command Staff while Pond worked on setting up that Quarantine. At the same time Merrick was coordinating and watching the rest of the station for any critical life signs.

Hikaru and Jora donned their EVA suits and transported to the station without incidence and began examining the command staff. Meanwhile Pond worked swiftly to get the Quarantine in place as R’Ven scanned the station.

All too quickly trouble started. An irregularity was found with Captain Renos. Pond revealed that ne was pregnant. But Jora indicated that there was blood and the fetus was in distress.

Meanwhile R’Ven revealed that there was another person in distress on the station and R’Ven beamed them up to the Quarantine along with contaminated air. Pond realized that if they didn’t get inside quickly the person would die. After R'ven did his best to clear the contaminated air Pond beamed inside with only an oxygen mask. At the same time on the station Jora realized that fetal blood-oxygen levels were slowly dropping. They had about 90 minutes to stabilize the pair.

Meanwhile Merrick is wondering if the slight dip in some of the bio-signatures on the base is just a fluctuation or indicative of something larger.

Lt. Commander Stennes and Lt. Lahr made their way to Darwin’s bridge, where it turned out Stennes was the ranking officer on the deck. While Lahr grew testy due to nervous apprehension in their current predicament, Stennes jumped into action coordinating the away teams.

Immediately after they contacted the away teams and began to monitor the EVA suit data, an unknown ship dropped out of warp on a direct course to DS26. Unresponsive to hails at first, the ship made contact and identified itself as the Abitalia, commanded by Minora Akantha, a member of an insectoid species.

Stennes and Lahr engaged Akantha in conversation, but she seemed insistent about gaining access to DS26 in search of something called the Kheritz’lion, and refused to accept their explanation about a medical emergency aboard the station.

Materializing inside the Quarantined area Pond, fighting the lessened affects of the contagion and the waves of sleepiness that it caused, was able to quickly stabilize the patient. The problem was if they continued to pull patients from the station they would quickly run out of room in the sickbay. Meanwhile Merrick, who had slid into as EVA suit, to assist either the team on the station or Pond noticed that patients on the station appeared to be sliding deeper into sleep and towards coma-like states and he alerted the bridge.

On the station Hikaru was growing more concerned about the flickering lights in her area and Jora was working to stabilize Renos and the fetus. it turned out the flickering light were an indication of a larger danger. The growing botanical infestation on the station was extending tendrils towards their location. Merrick did an emergency transport, bringing the Jora, Hikaru and the entire command staff into the Quarantine.

Immediately the doctors get to work. Jora is to do a fetal transport while Pond works on Renos. At the same time Hikaru realizes something startling, that one of the command staff is waking up: Commander Icavoc!

With Pond and Jora already at work on their separate tasks Merrick transports into the quarantine to work with Hikaru in examining Icavoc and understand exactly why he woke up. Pond seeing no one on the outside assigns a nurse to keep track of the data streams and at the same time gives R'Ven a few suggestions as to how the division of duties should continue. R'Ven, unused to the reigns of command, simply commends her and tells her to carry on with her suggestions.

As Icavoc awakens completely R'Ven and Hikaru approach his biobed and give him a status report. Scanning him with a tricorder R'Ven notes a peculiar substance in Icavoc's body and that the Commander's eyes are more blue then normal. He asks for permission to take that sample as it looks like alien spores tried to germinate within the Dokkaran and that may he be the key to fighting them off.