Sevo's Messenger Service. How May I Help You?

SEVO: oO Dammit! Which one of these buttons records the log?! Oo

:: Ayiana was standing by the center chair, recording a requisite log update as required by the on-duty command officer. No, she still wasn’t sitting in the chair, but she tapped around on the armrest console until she found out how to record the log. ::

SEVO: ...and while Lang, Shapiro, and Rosek were busy, the fissure became active again. Next thing we knew, one of our own shuttlecraft, the Kerla, was floating nearby. She had sustained significant damage and is unable to dock under its own power. Apparently they are delivering two new crewmembers and were pulled inside the fissure like we were. I am told Commander Skyfire will be beaming back to the ship and greeting them at the shuttlebay.

:: Ayiana tapped at the console to end the log, then slowly walked back to the safe and familiar area of the science console. She swung her arms back-and-forth absentmindedly, looking at everyone working diligently. As she watched, Ayiana recalled the last several hectic minutes of her bridge duty. ::

SEVO: :: To Shapiro. :: Ensign, do what you can to shore up our shields and SI fields. At the very least, we might have an easier time holding position *and* prevent us from accidentally being pulled back in and stranding the Captain and company here.

:: Ayiana mentally smiled as she saw her charges get to work. Maybe this command thing wouldn’t be so bad after all. ::

SEVO: =/\= They beamed over to the Triumphant, along with Commanders Vess, Eerie and Ensign Tan. =/\=

STOYER: =/\= Well, OK you have the bridge. Have you heard anything from the Defiant? I have Security and Medical with supplies standing by to send over, but I don’t know what they need. Can you contact them? Plus for engineering, have them let us know what their priorities are. That way I can have the proper specialist standing by. =/\=

SEVO: oO Well, it IS a good idea. Might as well give a status update anyway, and make sure the Captain is alright. Oo

SEVO: =/\= You-you won’t believe this, sir, but one of our own shuttles came through, apparently with a couple of new crewmembers aboard. They got pulled in like we did, and tossed around pretty heavily. The pilot doesn’t think he’ll be able to bring in the shuttle himself, sir. I was just about to have Rosek tow it in. :: Pause. :: Unnnfortunately- :: she lengthened the sound of “un”:: --the act of them passing through the already unstable fissure destabilized it even further. We--we’re busy working on ways to stabilize it, but its not looking good. =/\=

SKYFIRE: =/\= Understood. I do want you to keep working on it, and have Rosek prepare to tow in the shuttle Kerla. She's got no thrusters, and is carrying three of our guys. Bridge is still yours. =/\=

SEVO: :: Sighing. :: =/\= Yes sir. Oh, wait! One more thing! Lt. Stoyer contacted me to ask you guys what you need over there in the way of supplies and repairs. I was about to contact the captain when you called. =/\= 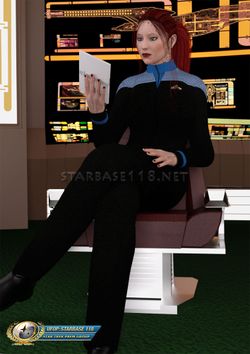 :: As Ayiana was observing the bridge crew, a middle-aged, red-collared Human spoke behind her. Ayiana was startled at his deep, gravelly voice. Coupled with the lines on his face, the man looked like he was a very seasoned officer. No, not officer, by the look of the pips. He was some sort of Enlisted, but Ayiana wasn’t too sure of the rank. Master Chief? She hadn’t seen one of them before! ::

ISIDORUS: :: raising his voice. :: Excuse me, Miss. Where is the Captain?

SEVO: oO Geez. Thanks for all the support, guys! Oo :: She sighed. :: Captain Reynolds left a while ago with Commanders Skyfire and Eerie.

ISIDORUS: :: raising his eyebrows. :: Where did they go?

ISIDORUS: I came to report to the Captain about the injured in sickbay. I apologize, I never introduced myself I am Command Master Chief Isidorus.

SEVO: I see. I’m sorry. I know of Command Master Chiefs, but I’ve never met one before. You- you guys aren’t all that common.

ISIDORUS: No Lieutenant, the Command Master Chief program has recently been reactivated to give the Captain another source of experienced help.

:: Ayiana noticed that Isidorus spoke with great confidence behind his words. He sounded like a man with years of life experiences to back him up. His mouth was somewhere between a smile and a frown, but Ayiana saw nothing but compassion and concern behind his eyes. These were things she only ever saw in Joined Trill with lifetimes of experiences. Standing next to him, even with her own Joined experiences, Ayiana felt...young. ::

:: The familiar tenor of her subordinate’s voice jolted Ayiana back. ::

LANG: I'm sorry, Ma'am. :: Reiner nodded back to the Ensign. :: And sir. I am finished with my work and I was asking if I may leave the bridge for a short break. My shift...has actually already ended.

:: Ayiana looked at the clock above the main viewscreen. Had it already been that long? ::

SEVO: Did you find anything out about the Invicta?

LANG: Oh, right. ::She gave Sevo the PADD in her hand.:: I noted everything important.

:: Ayiana took the PADD from Lang and quickly browsed it’s contents. She could read it in detail later. It looked like the Ensign did an excellent job researching and writing her report; a quintessential scientist! ::

SEVO: Thanks, looks good. :: She looked back to Lang. :: You’re off, but you’re on call if anything happens.

:: Once Lang walked off, Ayiana turned around and noticed CMC Isidorus standing in the same spot as before. Was he there the entire time, watching the scientists’ conversation? He never made a sound; Ayiana hadn’t even heard him breathe. ::

ISIDORUS: The Captain left you on the bridge as the senior officer?

SEVO: :: She frowned in mild frustration. :: Yes. Why is that so surprising to everyone?!

ISIDORUS: OK, if I may offer some advice. This will help you when you command a starship someday.

:: At first, Ayiana was hesitant. After all, despite his years, Isidorus was technically Ayiana’s subordinate; a simple enlisted man. What would he know about commanding a starship? Still, his voice had a tone of compassion behind it that enticed Ayiana to listen. ::

ISIDORUS: Remember that you are in command of a Sovereign-class starship. If something were to happen and the Captain or the First Officer could not come back onboard you are it. Do not get too bogged down in the details of something that will make you lose the big picture. The big picture is what you are responsible for. Let the other Department Heads handle the details and brief you. Use all of your resources. For example, I am a resource. I have been in Starfleet at least a decade before you were born. I will stay on the bridge to assist as needed.

:: Wow. What could she say to that? “If the Captain or First Officer could not come back onboard, you are it.” Those words resonated with Ayiana. Isidorus was right. At the moment, there was no “safety net” for her; it was sink-or-swim. He was also right about “The Big Picture.” Up until now, she had been concentrating on her job as a scientist: analyzing the nebula, developing hypotheses, creating procedures to test such hypotheses, and observing the results. Ayiana realized that the same, simple scientific method could be applied to command-at-large. She is still observing, analyzing, and developing expectations; just on a larger scale. A much larger scale. ::

ISIDORUS: I shall let you know, what I was going to report to the Captain, you have 27 injured in sickbay. Mostly bumps and bruises from when we were tossed around. But a couple of broken bones. Do you have any orders for me?

:: Ayiana never even thought of injuries. That just added another perspective, and concern, to everything. ::

SEVO: :: She paused to think. :: Yes. Can you go around and make sure everyone is alright with our current situation? We were jostled around pretty well, and being in an entirely different universe might be a bit of a shock to most people.

:: She never even realized when it happened, but as Isidorus walked off, Ayiana found herself sitting in the center chair. ::