Aleesia Yorval is the younger sister of Ayiana Sevo. 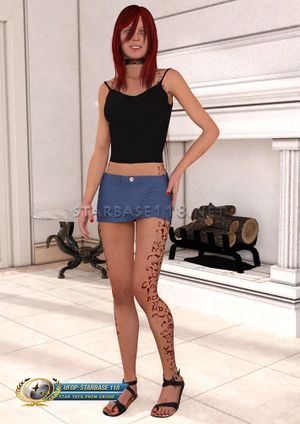 In many ways, Aleesia Yorval is the polar opposite of her older sister Ayiana Sevo. She has a wild personality; never afraid to speak her mind. Aleesia often has amusing (to her) quips or jokes about nearly anything anyone says. She is the quintessential party girl, usually found socializing in bars and clubs. Aleesia is a dangerous flirt, but does it more for the fun (or to annoy Ayiana). Contrary to her outward appearance, however, Aleesia is just as smart and capable as her sister. She recently graduated college on Trill, studying Xenolingustics and Xenocultural Studies; intending to be a diplomat one day. Upon graduation, she landed a small job at the Trill Ministry of Foreign Affairs. The mere thought of an Ambassador Aleesia Yorval one day shakes Ayiana to the core.