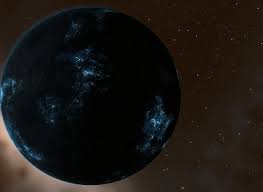 History: P-409 Sigma had only been documented and named by House Rattaan but a few years ago year 239212.23. House Rettaan, while reporting the planetoid's existence, did not make the news common knowledge among other houses in the expanse. The mystique that followed the legend has left starship crews curious about just what lies beneath it's exterior. Very little information had been made available by House Rettaan in the interim. It wasn't until the visit to the planet by the USS Blackwell had any well understood Federation studies taken place. In that time, a detailed account of the planet in the wake of many temporal anomalies that set the Blackwell crew aback was loaded into the Federation LCARS for the first time since the planet's discovery. Mission details were enclosed within the Blacknet database for safe keeping, as the exploits of the Blackwell and her crew made for some interesting discoveries about the system, the state of affairs surrounding the rock, and the planet itself.