Commander Melitta Herodion is serving as the Commanding Officer of the newly established Deep Space 10. 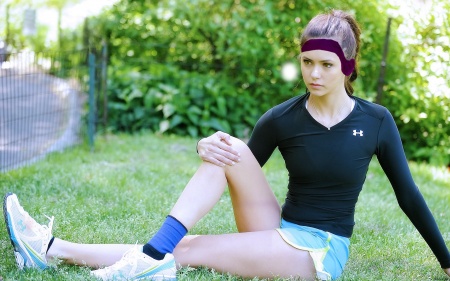 Melitta Herodion was born on 236305.25 which was seventeen years before the people of Til'ahn achieved warp capability. She was born to Andreas and Charis Herodion at the family home, Great city, Damodara Til'ahn. With the addition of her younger sister this was where Melitta would be raised over the next eighteen years. Given that her family was fairly well off, Melitta and her sister (Corinna Herodion) had for the most part a trouble free upbringing. Given Melitta's strong fielding abilities she started officially training at the Fielding league as young as six years old. Before that her father, Andreas Herodion, taught her a few simply techniques to help control her abilities to prevent headaches from taking hold.

While Andreas was a nurturing and supportive figure who always encouraged Melitta in whatever she choose to do Charis was strict and firm when it came to schooling Melitta into a proper daughter. Being a local school teacher by trade Charis was particularly hard on Melitta when it came to things like doing well at school and maintaining good posture. Despite this firmness Melitta learned to appreciate what her mother was trying to teach her even though she didn't always agree at the time.

With school and extensive training at the Fielding league Melitta had little spare time for her own pursuits. One hobby that her parents did allow to interrupt Melitta's hectic schedule was the sport of Futbash. Charis reasoned that it would help develop Melitta's Fielding abilities but for Melitta it was a way to get out and let loose so to speak. By the time that she finished secondary schooling she helped the local team acquire the district tournament. This was a feat that she was most proud of.

Melitta's one other hobby outside of the Futbash field and her academic work was that of swimming. After almost drowning at ten years old in a boating accident, Melitta convinced her parents that it was important that she learned to swim proficiently. At first Melitta was understandably hesitant to get back in the water but persisted nonetheless and eventually mastered the ability. As an adult she has taken to the habit of swimming to maintain her level of fitness.

one notable family member in Meiltta's life was that of her grand father Aristides Herodion. Working as a local law enforcer in the city of Singh he taught Melitta the value of civil rights and doing the right thing in order to maintain peace and justice. Although he wasn't always close by his influence ensured that Melitta knew what it meant to live in a free, peaceful and just society and if the need arose to fight to ensure that those rights were upheld. Sadly Aristides passed away of old age shortly before first contact was made and it was only around this time that Melitta truly witnessed what a society could be like when chaos was permitted to flourish.

One force that Melitta saw in that time, that was also trying to keep order on Til'ahn was Star Fleet. Even though they were alien to her home world she was inspired by how they were willing to fight both through negotiations and actions to keep the peace and help rebuild the once great Laudean government that Melitta decided that Star Fleet was the type of organization that she would be proud to serve in. Toward the end of 2379 after she had finished her secondary schooling Melitta sought to apply to Star Fleet Academy as a way to both honor Star Fleet for they assistance and to remember her grandfather, particularly the values that he taught her. At first she struggled to find a particular division of Star Fleet to apply to. While she did quite well at school she had no interest in the sciences or fields like engineering. The one division that did catch her interest was that of the Star Fleet marines as their appeared similar if not larger and better trained to the various militias that existed on Til'ahn. It was the Marine's attitudes toward defending the Federation and its values even when it came to violence that Melitta found herself most drawn to. After acquiring sponsorship to attend the Academy Melitta traveled to Earth to start her studies and training in the early months of 2380.