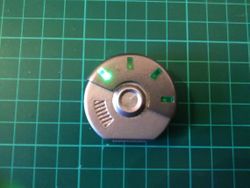 Psionic Inhibitor/Stimulate attached at base of skull hidden in his hair.

Duncan's natural charisma allows him the ability to talk the pants off of just about anybody (sometimes literally). This makes getting his information for his articles easy and makes him a natural news reporter.

Duncan was born the oldest of his siblings in his early years his parents discovered that he was uniquely gifted in both empathic and telepathic abilities. Where most Betazoids can only achieve a T4/E4 level; Duncan achieved T6/E6 making him the equivalent of a Human genius to the people of Betazoid. After a short-lived career as a Starfleet security officer, Duncan decided his future existed outside surfing as a civilian. He is now a reporter 4 the FNS new service.

((OOC: This character a personal sub-character as part of Phoenix Inter-species Protect Agency, PIPA. That is about initiated by Alivea Daniels to help those who need them, and help in ways Starfleet can't.))