Born in Tactha City, a large metropolis on the southern hemisphere of Rigel VIII, in 2369, Jenta grew up mostly on the streets. After her mother was sold on the Orion Slave Markets and her father was slain by a street gang when she was six years old, she was hiding in a hovel when another young Orion girl, twice her age found her. Vyska. The teen convinced Jenta to stick with her and she looked after the frightened young Orion. As Jenta grew up, she looked up to Vyska and considered her her only and best friend.

Life on the streets of Rigel VIII is hard, even for Orion females, especially if they're not of the upper class ones who run things behind the scenes. Jenta, who would be considered nothing more than stock if she were caught learned to scrounge for scraps to sell for latinum. To steal. To fight. By the time she turned seventeen, Jenta and Vyska had survived by evading the slaver gangs. Hiding in the streets and rundown buildings. It was a life no one should have to endure, but she did. It wasn't a good living, but they managed. She learned to defend herself, having been taught by Vyska, an Orion female of higher station who had chosen to turn her back on the cruel way things were run. She taught Jenta how to use her pheromones as a means of defense, but also how to more precisely control it to avoid being manipulative like so many of their gender were.

It was a hard life, avoiding or fighting the slaver gangs and she'd often been caught. Subjected to some questionable things before Vyska managed to rescue her.

In 2391, shortly after her twenty second birthday she and Vyska were accosted by a slave tracer. A bounty hunter who specialized in tracking down potential slaves, or runaways who'd managed to escape the markets. Someone had sent him looking for Vyska. The Orion male grabbed Jenta, holding her with one of his deadly curved, heated blades at her throat. Vyska threw herself at him to free Jenta and in so doing, was slain. Seeing her only friend killed in front of her she released a heavy dose of her pheromones to distract the hunter. Leaping at him in a frenzy she managed to disarm him of those twin knives and turned his own weapons against him. After a bloody furious few moments he was dead at her feet. With her friend dead and all on her own the Orion fled. She spent the next year moving through the slums of the cities of Rigel VIII. Using the knives she'd kept and became the hunter, tracking down and killing any slaver gangs she could find. She fled Rigel VIII after a few months, when several slave hunters had been hired to find her.

Jenta hid in various remote outposts and waystations in Orion space, trying to get out of their territory and somewhere safer. Hiding on Deep Space K-7, on her way into the Klingon empire she was found by a group of three. In defending herself she was badly injured but a Starfleet Marine, who was passing through the station saw what happened and came to her defense. Got her proper medical care and despite her reservations they convinced her they had no interest in anything more than stopping someone from enduring a life of servitude. Before the Marine moved on Jenta asked for help in getting away. The Terran agreed to travel with her as long as she was willing to travel all the way to Earth. She did and as soon as she arrived she marched herself to Starfleet Headquarters and enlisted.

In 2392 she was accepted to the Academy for Marine training.

Since being assigned to the Atlantis crew, and now the Chin'toka she's been affectionately called the Goddess of Blades. Mostly by her then, fellow Marines. She's an often lascivious, but no nonsense sort who is a fiery whirlwind on the battlefield. Specializing in close quarters combat where she can employ the twin blades that she has sheathed on her hips at all times, she's deadly with blade and phaser. Preferring the shorter rifles that give her mobility and versatility in switching between blades and ranged. 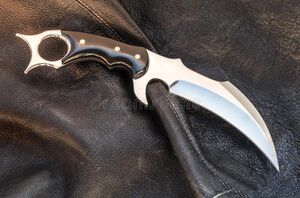 The blades themselves are curved, similar in appearance to a Terran Karambit, but the blade itself is two inches longer. These particular knives also have a technological element to them. A power cell built into the handles provides current to the filaments within the metal that cause the blades to heat up to a near white hot appearance. Hot enough to be able to cut through various metals, most typically those that are used in personal armor. Such as that which the Starfleet Marines use, even Breen armor, or the exoskeleton of Consortium RoLFs and spiderbots.

She has a cool confidence that often hides the terrified young girl who grew up on Rigel VIII. She's as deadly as she is beautiful.

Having been taught specialized techniques by her childhood friend in how to control her pheromones, she doesn't require Federation approved suppressants. Which is notated in her medical file. As well as the potency level being slightly above average.

Jenta has a deep and intense loyalty to the Federation and Starfleet specifically. Seeing them as her saviors, freeing her from a horrible life, she's dedicated hers to paying back that debt. That loyalty extends even more fiercely to the members of her crew.

Jenta has had a fairly distinguished career in the Marines. Having served on both the USS Vandenburg and the USS Athena before being assigned to the USS Atlantis during her relaunch under then Commander Brell.

One of the crew who repelled the Consortium ambush, she also participated in the rescue of Lt. Commander Toryn Raga after his sacrifice to save their Captain.

With the transfer to and launch of the Chin'toka, she's been laterally shifted from the Marines to the fleet proper as a member of the new Strategic Operations Response Team. Still specializing in CQC. Her minor in Engineering makes her a versatile combat engineer.