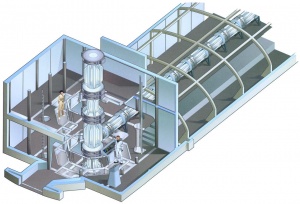 The Engineering Department of the USS Independence-A provides the essential support required for the ship and other departments.

Engineering on the Independence-A comprises of multiple sectors divided up by the multitude of sub-departments within.

Main Engineering can be found on Deck 5 however it has been uniquely designed ability to split into three sections, dividing the warp core which allows all three sections to achieve warp when the Multi-Vector Assault Mode is activated.

The Prometheus Class is the pinnacle vessel, the fastest in both Impulse and Warp, the most powerful, advanced and innovative vessel that Starfleet heralds as it's flagship. Being a warship, the Prometheus has had to excel in all instances to outrun and outmatch any other vessel in the quadrants.

As such, the warp system that has been designed for the Independence-A is a M/ARA system with a few essential quirks. As above, the warp core can be divided into three sections to power the three sections of the MVAM. The warp core has no less than three reaction chambers along its height. During normal operation matter is fed in at the top of the core and antimatter at the bottom, as in any normal warp core. The fuel streams pass directly through the upper and lower reaction chambers and continue down to their meeting point in the central chamber. The core thus operates in a manner similar to any standard model, achieving high efficiency through the long core design.

The central reaction chamber lies on the separation plane, and once the ship splits it is shut down. In the lower engineering section a secondary matter feed just under the central chamber comes into operation, feeding deuterium down to the lower reaction core. This process is mirrored in the upper engineering section, with an antimatter feed sending fuel up to the upper core.

As a result, the combined engineering sections can operate at an efficiency level comparable to any contemporary starship, while the separated sections lose a measure of efficiency because of the shorter warp cores. The primary hull operates on a separate Defiant-style warp core when separated.

All three sections are independently commanded but observed from one section in Main Engineering under the Master Systems Display (MSD). All relative ship information (such as damage, power distribution, etc.) is displayed on the cutaway image of the Prometheus Class starship. This monitor can be used to direct ship operations and can be configured for limited flight control if necessary.

Coupled with the MSD is the monitor specifically for the Warp Drive, giving accurate readouts of temperature and condition. The regulator is manned by one Engineer at all times who puts it through diagnostic cycles every few hours to maintain it's peak efficiency.

Some Engineers on the Independence-A have at some point been involved in technology research at Utopia Planitia. Using the resources and multiple opinions available to them, the Engineers on board are able to carry on research into a wide variety of deep space systems, including advancements in the LCARS system and an experimental EEH (Emergency Engineering Hologram).

As such, the sub-department of Research & Development was created to allow those with the relevant work experience and training to be available at any time they are required to perform miracles and produce technology not formally acquainted with the Federation and Starfleet.

Current projects for the Research team include increases to the Abaltive Armor and increased weapon efficiency when faced with a warp core breach. Other non-committed projects include a functioning Emergency Engineering Hologram (EEH) and the Emergency Command Hologram (ECH).

The Multi-Layered Shielding System (MLSS) was modified in 2376 in order to increase effectiveness against both high-energy tractor beams and phased polaron particles, measures clearly aimed at the Borg and Dominion respectively. Under normal operation the shield modulation frequencies are under the control of the ships computer system, which continually evaluates incoming weapons fire and automatically re-modulates the shields to give the most effective possible defense. It is thought that this system, in conjunction with transport inhibitor technology, will also enable the shield system to prevent beam-through by Borg and Dominion transporter technology.

The outermost layer manipulates graviton polarity in a way not typical to shields, creating a graviton flux disruption that prevents many know designs of threat tractor beams from locking on to the vessel. This layer also incorporates transport inhibitor technology, helping prevent an enemy from transporting aboard.

The middle layer incorporates automatic rotation of frequency and modulation with meta-phasics, which absorbs enemy fire, spreads it out along the shield. This shield sends data on what type of weapon is used and what frequency and phase the weapon uses. Once this is analyzed, the computer can automatically configure shield to have the same frequency as the incoming weapon, but to different modulation, which dramatically increases shield efficiency.

The innermost shield layer is a multi-phaseic shield. Based on standard regenerative shielding, this is the ship's last shielded line of defense, once this is gone the ships only defence is the Ablative Hull Armor. The key to this layer is its ability to 'wave' while in a state of temporal flux. This technology was developed in part by the crew of USS Voyager and the Mannheim Research Station. Instead of a standard oval bubble, this layer 'ripples' or waves (like the surface of water) while in a state of temporal flux. This dramatically increases protection against weapons such as the Hellfire, Chronaton, and Transphaseic Torpedoes while at the same time helping protect the ship from temporal anomalies.