Lieutenant Elya Tali is a Laudean currently serving as Chief Engineer aboard the USS Apollo.

Elya Tali is a female Laudean born on June 10, 2361 (27 years old). She is 167cm (5" 6') tall with blond hair, pale yellow eyes, and light green coloring around hair and ears. Her hair grows much more quickly than most humanoid species, she shortens it often, and keeps it in a large loose bun at other times to keep it out of the way.

Like most Laudeans, Elya has the ability to perceive energy fields that pass through her body, known as Fielding. As indicated by the the light green coloring of her ears and forehead, Elya is not an expert at distinguishing fields from one another, and generally only perceives very powerful and nearby fields. Strong fields can have a large emotional effect on Elya.

Elya was raised in the Govinda Kingdom of Til'ahn, on the meadows between the forest of Alamak'ut and Govinda's vast guyver orchards. Elya was just finishing her studies as the Federation made first contact with the Laudeans, and fought briefly in the ensuing revolution against the royal family. Disillusioned with the continuous warfare and corrupt politics of her home world, Elya saw an opportunity to escape and see the new frontiers of space that had just opened up to her people. Once the revolution subsided and the Federation returned to her planet, Elya met with Starfleet ambassadors and convinced them to accept her to the Academy. Shortly after she arrived at the academy, the bombing of the Federation Embassy occurred on the Laudean home world. Several officers insisted she be sent back and that the Laudeans were not yet in a position to be Starfleet officers, but Elya realized that Starfleet interest in the Laudean fielding ability could be used to her advantage and arranged to guarantee her training. As news of the bombing started to fade, Elya had an easier time in the Academy and diligently studied toward her goal of exploring the stars.

Elya arrived aboard the USS Victory shortly before the Insectoid attack on Starbase 118. During the attack, the Victory embarked to the Insectoid's nebula to investigate rumors that Romulans were supplying the creatures with cloaking devices. The Chief Engineer at the time, Cyrus Webb, was promoted under strange circumstances as an Intelligence Officer, leaving Elya as an especially young and inexperienced Chief Engineer. A Saboteur aboard the ship attempted to disable the inertial dampeners, but was thwarted when sudden glitches in the EMH gave away that something was amiss. The crew of the USS Victory captured a suspicious Romulan freighter with cargo intended for the nebula species, but was forced to destroy a Romulan warbird in the process.

Following the Victory's arrival back at Starbase 118, Elya was introduced to her new assistant engineer, Lt. Kevin Breeman. While repairs on the Victory were underway, they were ordered to accompany an experimental prison-transport runabout, the USS Aztec, to its destination. Although the ship was supposedly fully functional, previous pilots reported being unable to exceed warp 2. While trying to push the ship to faster speeds, a mass-compensator malfunction left the Aztec stranded in subspace with minimal life support. After an emergency landing on a nearby subspace planet, the Aztec's crew was discovered by a species of giant sentient metallic creatures (robots?), who were shocked to discover sentient biological lifeforms. Referring to the Aztec as a "baby", the metallic creatures assisted with repairs and sent the Aztec back out of subspace with some additional unknown modifications.

Promoted to Lt. JG on December 18, 2387 and received the Barclay Bead award for the 2387 year. The Victory's next mission took them into Romulan space as part of the Federation assistance prior to the Hobus supernova. Although the Victory arrived too late to assist Romulus, the crew diverted to rescue a Romulan senator friendly to the Federation's cause. Elya arrived on planet with the away team, rescuing the senator despite the efforts of a Tal'Shiar assassin.

Elya transfered to the Aurora, which was in need of a Chief Engineer after a major refit. Under the command of Commander Della Vetri, the ship departed to explore subspace anomalies in the neutral zone related to the Hobus supernova. The Aurora was absorbed by a transient wormhole and dumped on the far side of the Romulan Empire. The passage through the wormhole proved traumatic to Elya, whose fielding sense was overwhelmed by the intense energy field. After recovering, she accompanied an away team to explore an abandoned Romulan ship. The ship proved to be home to a crew of Romulans that had been dragged through the wormhole two hundred years ago, and forced to survive on their own. Elya assisted with a number of repairs aboard their ship, while covertly transferring the Romulan logs back to the Aurora in hopes of finding a clue to returning home. 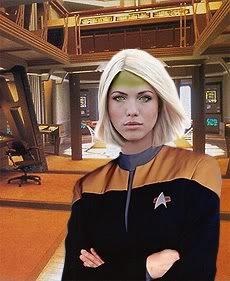 Fighting broke out on the Romulan ship between factions that wished to remain on this side of the wormhole, and those who wanted to return to the Romulan Empire. A crystal formation was discovered attached to the Romulan's ship which was sent toward the Aurora and began feeding on the Aurora's warp core energy. Elya stepped her team through shutting down the warp core in order to get coax the creature back into space where it could be caught in the deflector beam. The away team found themselves caught in the middle of fighting aboard the Romulan ship, until a deal was made aboard the Aurora between the two sides. The Romulan vessel would remain in place for those who wished to stay, which the Aurora would take the remaining Romulans back with them.

Upon her return, Elya investigated probe sensor logs which showed artificial ring structures inside the wormhole, seemingly designed to stabilize the anomaly. Guessing a connection between the structures and the crystal species, an investigation began into whether it could be used to safely traverse the wormhole conduit back to Federation space. After successful tests, the Aurora navigated safely through the wormhole with the cargobay full of Romulan refugees, and docked at Starbase 23 for repairs. After quick repairs, she received her promotion to Lieutenant.

The Aurora departed to survey a section of space near the Azure nebula, but encountered an Orion vessel along the way illegally transporting slaves as well as members of the Scarlet Brotherhood. The Orions escaped onto the Aurora using new transporter technology and filled the ship with Orion/Deltan pheromones, but the crew prevailed after Elya and a science officer disbursed an anti-pheromone solution into the environmental control system. After the Orions escaped, a series of a sabotage attempts were discovered aboard the Aurora, including a bomb connected to the anti-matter containment system that had to be defused.

A team from the Aurora was sent in disguise to Farius Prime, the original destination of the Orion vessel, to infiltrate and collect information on the Brotherhood's plans. After entering the hidden Brotherhood compound, Elya befriended an Orion slave girl named Jalen. After some unexpected physical intimacy, Jalen helped the Aurora's team get access to a secret room inside the compound. During their escape, Jalen was trapped inside the compound after an explosion and was reportedly killed, but in fact escaped from the Brotherhood and eventually to freedom unbeknownst to Elya. 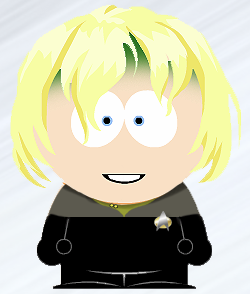 In 2388 the Aurora crew transferred to the USS Avandar, a new Luna class ship, during which Elya received the Explorer's Ribbon and Bajoran Campaign Ribbon. The ship's first mission encountered a strange phenomenon which left the crew briefly unconscious, but in a shared dream-state where time passed much more quickly. In the dream, the Avandar crash-landed on the planet below and years passed as the crew was forced to adapt to the new planet, defend the surviving crew against natives, and cope with an attempted mutiny against the Captain.

The shock of being thrown back into 2388 after what felt like years in the shared-dream was difficult for the crew. Elya found it especially difficult to forgive the actions some fellow crew-mates had taken inside the dreams, and applied for transfer soon after.

2389, Elya transferred along with Cmdr. Barnes from the Avandar to the Apollo, finding herself once again under the command of Captain Andrus Jaxx. En-route to investigate the disappearance of three Starfleet ships, the Apollo discovered a freighter carrying a dormant Borg scout ship. Confiscating the cargo from the freighter, Elya designed a forcefield system using the Apollo's new anti-borg technology, and brought the ship aboard safely.