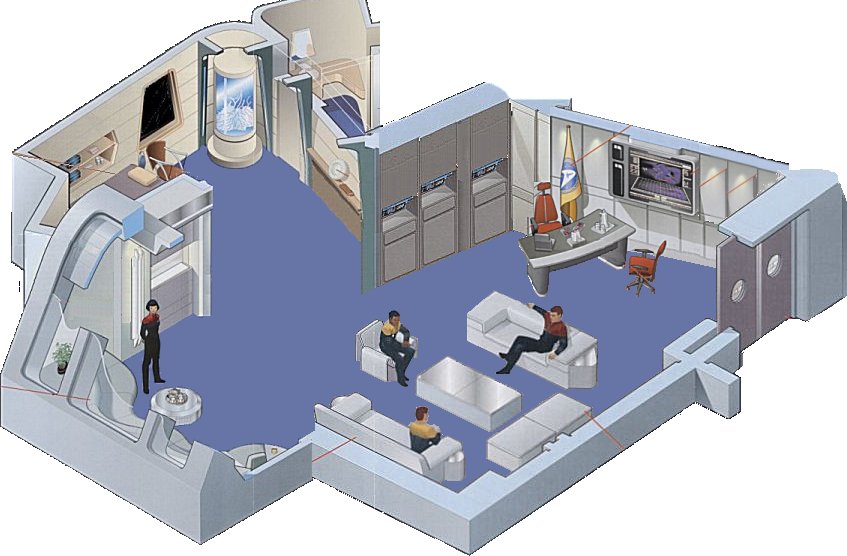 The Diplomatic Suite aboard the Horizon class USS Darwin-A is located in the Sphere Section of Deck 2, on the port side of the ship. The location of the Diplomatic Suite, with ready access to the Main Bridge, the Captain’s Ready Room, and the Observation Lounge and Conference Rooms, is designed to allow visiting dignitaries the ability to interact with these command hubs of the ship.

The Suite consists of a work station, a conference area and lounge, replicator alcove, rest station and adjoining head. A UFOP flag, tasteful and serene decorations and a commanding view from exterior viewports make the Suite an inviting space.

The Diplomatic Suite is designed to be a private and self-sustaining workspace for visiting dignitaries, ambassadors, diplomats, and other VIP personnel. When not in use for this purpose, the Suite is used by the USS Darwin-A’s resident diplomatic officers and staff as their primary diplomatic office.

The work station in the Suite consists of a large desk with an ergonomic chair, and a visitor’s chair on the front side. The desk contains an isolated monitor that is connected to a dedicated encrypted communications array for sensitive communiques. As well, a dedicated computer node allows for encrypted file access and creation.

A nearby multifunction display, tied into the dedicated communication array and computer node, allows for customizable information and data retrieval and display, as well as communications.

A UFOP flag is displayed prominently in this area, though the flag is often switched out for a representative banner of whichever political entity the attending VIP belongs to.

The conference area employs a relaxed and neutral setting for informal meetings and socialization. Comfortable couches and chairs allow for friendly and colloquial gatherings, where visiting dignitaries can relax in a social setting without the pretense of a formal venue. For more formal and rigid gatherings, the Observation Lounge on Deck 1 or the Conference Rooms on Deck 2 are employed.

A large, comfortable couch and a small table allows for private reflection and relaxation. An adjoining replicator alcove provides sustenance and refreshments, while large viewports allow a commanding vantage point.

A semi-private area for sleeping and an adjoining head allow for the accommodation of long work schedules for visiting dignitaries. Although all VIPs are assigned proper quarters on Deck 6, these amenities allow for the use of the Suite for long periods of time in situations such as emergencies, heavy negotiations, or other isolating circumstances.