While every Galaxy class ship has lounges and bars, the most well known is the one referred to as Ten-Forward. Due to being located at the bow of the saucer section. Deck 10, forward section. The Constitution-B however has a one of a kind Ten Forward that encompasses space on two decks. With a second floor, it is already a marvel compared to her sister ships. Yet the bar in question has recently undergone some expansive renovations. Taking the otherwise typical Starfleet lounge and added a touch of ancient Terra. With proprietorship having been taken over by Elias Kincaid, the former Black Hole Bar, has been reopened and re-branded as The Saloon and is an exact replica of the style of bars found on Earth during it's Ancient West era. The doors on both floors have been replaced by swinging wooden doors that sit midway up the door frame. Patrons are required to push them open to gain entry or exit the bar, as was the standard during the era the Saloon is modeled after.

Beside the port side entry to each level, sits a replicated upright piano from the same era staffed by a holographic pianist. A second piano and musician is one the second level, though mirrored. Both play a variety of classical music, era specific for the most part to keep a light and lively atmosphere within the bar.

Upon the raised floor, centrally located by the viewports are a pair of large, round tables with a felt surface intended for the pastime of various card games of chance. Specifically, numerous varieties of Poker. The floors of both levels have a polished wooden appearance. While the walls, also of an oaken style are purposefully tarnished to look aged. Even the ceiling have the same natural motif. With crossbeams adorned with various replicated animal skulls, iron banded wagon wheels, bovine horns, and countless other decorations of the time the bar is inspired by. Hand woven dream catchers hang from the rafters in places, while a large headdress with numerous long feathers sits above the opening to the kitchen on the main level. A non-functional replica of an American long rifle rests behind and atop the bar on the second level. The entire establishment utilizes the holographic emitters in place to create a unique atmosphere. As well as additional staff in the form of cowgirls and cowboys all dressed in period garb. 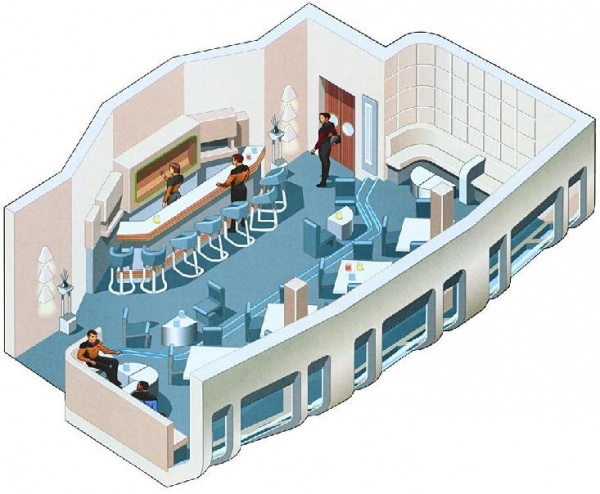 Main level The main level of the bar is filled by the bar itself with a small kitchen and adjustment office behind it. There is no direct entrance to the kitchen itself but there is a small port behind the bar to transfer the food from one room to the other. Access to the kitchen and Kincaid's office can be found in the corridor outside the bar. A pair of dart boards can be found on the port and starboard walls. Just off to the side of the piano and the door.

Top level The second level has the exact same size as the main level. Tables have also the same setting. The bar area is smaller than on the main level, with no access to the kitchen. The extra space is taken up by a stage that can be used for musical performances, or filled with a holographic mechanical bull for the more adventurous types. Four card tables reside on the second level. A pair of dart boards line the port wall beside the stage/mechanical bull ring.