Lieutenant J.G Chelin Ch'Gabor is currently serving as a Chief Science Officer aboard the USS Constitution-B.

- An Akira-class model - A present given to him when he was 8 years old by his brother. The first and last present he ever received from his brother, he keeps it to remind himself that maybe his brother has a good side.

- A Star Chart - He got this chart from his first visit to Earth after leaving Andoria. It displays all major worlds of all major factions in the Alpha and Beta Quadrant. He frequently updates it whenever a new planet is discovered.

Charon ch'Gabor (CHAN) - A Starfleet Officer who served during late 2350s to 2367. A natural born engineer, he was a friendly and people-person, described in good terms by other. Charon was killed at the Battle of Wolf 359, aboard the USS Kyushu, a mere few hours before Chelin was born. His death greatly affected another bondmate, Shena. It is unknown if he was assimilated by the Borg, as his remains were never found on the wreck of the USS Kyushu.

Shena zh'Kirean (ZHEN) - Before the death of her husband at the hands of the Borg, Shena was a caring, and kind person, a person interested in travelling and loved knowledge. However, once he had died, she had become less friendly and more cold. Despite that, she loved her two sons, and would care for them deeply, sometimes coming across as 'overbearing'. For her whole life, she had loathed being any related to Starfleet, but since most in the family are in Starfleet, she had no choice. She currently lives on Andoria, in the same house for numerous decades. Chelin is the closest to her, compared to the other parents.

Axselen th'Elithe (THAAN) - A reporter for the Federation News Service, Axselen is determined and self-driven. The youngest in the group, he usually is seen around different planets and bases, reporting on whatever was happening. He is described as cheery and bright, and currently lives in New Tokyo on Luna. Chelin had met him on a tiny few occasions, but the two are on good terms.

Zyraha sh'Arcanis (SHEN) - A well renowned doctor that specialises in different fields, Zyra had a long history in the field. She is aspiring and analytic, liking numbers and things like that. Her homebase on Earth at Starfleet Command, she is not an officer, but a Doctor hired there to tend to whatever happens in the building. Her home is also on Earth, San Fransisco, where she lives with her 2 Andorian Rodents. Chelin only knows her through news reports, but they had met on a single occasion.

Chelin had a dramatic entrance to the world. His father, aboard the USS Kyushu when it entered Wolf 359 for battle against a Borg cube. While his father was at his post in engineering, his older brother and his mother, pregnant with him, was evacuated to an escape pod. After being saved from death, his mother, almost reaching Earth, gave birth to what is know known as Chelin.

He spent his first few years on Earth, unknown of his existence of his (chan) father. 5 years after landing on Earth, he moved back to Andoria and began his primary education there. Although he enjoyed life on Andoria, he always felt a missing link to somebody. From there, he aspires to become a Starfleet officer for numerous reasons, to explore the galaxy and to satisfy his needs of 'knowing'.

After completing his secondary education, his brother Cherin was posted aboard the USS Delegate on stardate 238111.24 as a security officer. This made Chelin to want to really go to Starfleet.

Little is known about what Chelin did during this time from 2381 to 2387, but personal logs found in his PADD indicated he continued his secondary education, and after graduating he joined an Andorian organization which studied about the local wildlife.

After trying for almost 6 years in 2387, he finally entered Starfleet as a Science cadet, that majored in Ecology and Astronomy and minored in Helm. Afterwards, he left Andoria for Earth to continue his studies in the Academy, after a one year course (prior to enrollment) on Andoria.

He wasn't the best nor worse in class, but the professors always favoured the other cadets than Chelin. This formed into a habit for always trying to get someone's attention and his now loud demeanor. This didn't stop him from attempting to try to beat his other cadets and after his test, he finally gets to board a onboard a ship.

A place where all of Chelin's incidents and accident that occur during his mission.

USS Constitution-B - Mission: Unity - Fell down a hole in the deck, so he sustained a minor concussion and bruises. Later hit by flying shards of glass, thus bled.

USS Constitution-B - Mission: Cloak and Dagger- Tripped onto the ground from a somewhat high area, fractured left wrist and twisted right foot. Then shocked by electric shock device. Then got shot in the back by a phaser.

USS Constitution-B - Mission: What Lies Below - Exposed to some narcotics that took the form of a yellow sap, which affected him along with the away team. Suffered a headache and fallen unconscious on route back to the Constitution. 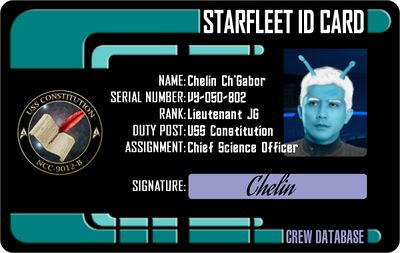