Callium Treetus is currently serving as a engineer aboard the USS Resolution. 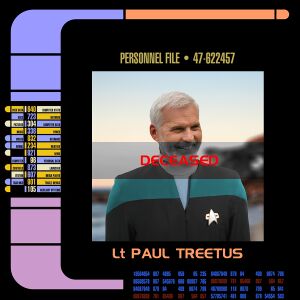 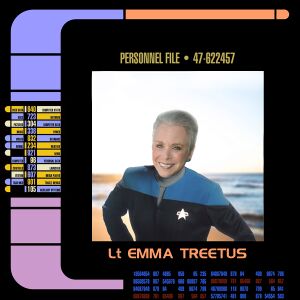 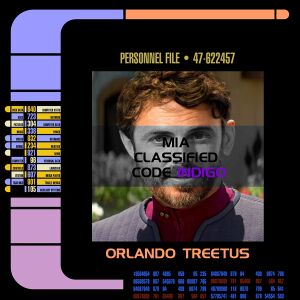 Callium was born and raised in Santa Fe, New Mexico. Second son to Emma and Paul Treetus. At the age of twelve, Callium’s Earth bound life was changed when his parents were both transferred to Deepspace 4. Orlando (Callium’s older brother by 4 years) was also briefly stationed at Deepspace 4 before being transferred *. Callium was always destined to follow in his family’s footsteps of enrolling into Starfleet however the loss of his brother and later his Fathers illness was a pivotal point in his life. With details of his loss classified, the family and in particular Callium felt closure was never truly possible. Callium’s decision to join Starfleet was thus twofold, follow the family tradition, but on a purely personal level, try to achieve a rank high enough to find out the truth behind his brothers’ death.

At the age of 24 Callium’s father Paul Treetus was diagnosed with Clarke’s disease. (Clarke’s Disease is a disorder of the human brain whose symptoms increase and worsen over time. Symptoms include hallucinations and (in the final stages) severe pain. It is fatal though treatment can expand the life expectancy from 15 to 40 years after treatment.) With his mother, still stationed on Deepspace 4 (And separated from her husband Paul after the breakup induced by the loss of Orlando) Callium was left to look after his father on Earth. The drawn-out disease lasted for a further 22 years before his father final succumbed. During this time, Callium was head hunted by Dr Taveen H’Pol from the Darwin Academy to become a member of their new Astro design lecturing team. This remote teaching role suited Callium, who was able to combine looking after his father and lecturing.

Callium’s last twenty years has seen him continue his educational skills and help dozens of now leading Astro designers help shape Starfleet and other organisations across the quadrant.

Callium lost his right hand during an accident on his family ranch where a power regulator overloaded while Callium was performing a routine service of the unit. Callium was fitted with a synthetic hand to replace his biological one. (This was fully paid for by JINKARA PLC who were found negligent in the lawsuit that followed), Callium has shown no significant loss of ability (although phantom pains and spasms do occur from time to time.)

With his Fathers passing, and no reason to stay on Earth, Callium’s promise to find out what had happened to his brother rose to the forefront again. With his tenure at the Darwin Academy coming to an end Callium made the bold decision enter Starfleet at the ripe old age of 46. Callium enrolled as a Starfleet cadet with the drive to find out the truth about Orlando as the guiding light to succeed.

Below you'll see a table which contains images for rank pips - you can change the word 'Gold' for 'Red' or 'Teal' or one of the other colors listed earlier to match your duty post. More instructions about how to use the service record template can be found at Template:Service Record.