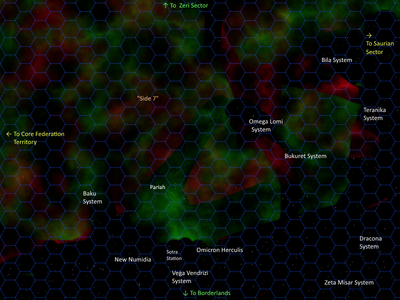 Vast and untamed, the Avalon Sector has been frontier territory of the three major powers since the 22nd century. Dominated by the better part of the Briar Patch and historically regarded as insignificant, Starfleet only took notice of the Avalon Sector when the planet Ba'ku was discovered in 2375. After the incident with the Son'a, Starfleet made some headway into the region over the next 10 years, eventually assigning a lone vessel, the USS Discovery, to the region. In 2384, Deep Space 285 was constructed after the discovery of the Saurian Empire and in response to Romulan interests in the region. After the destruction of Genura in 2385, the Federation began to devote more diplomatic and scientific resources to the region. They were nearly all recalled after the destruction of Romulus and Remus in 2387, and what little was left was further reduced after other interstellar crises like the Vaadwaur Invasion of 2387 and the Klingon Invasion of 2389

After the Gurab Crisis in 2389, Starfleet withdrew the last of its resources from the region and the border was redrawn to make Ba'ku, a Federation world, inside a Federation controlled sector. The DS285 station became a backwater assignment, no longer the seat of a Sector Command or a branch of the admiralty. No Starfleet ship was assigned to the region until late 2391, when the USS Constitution-B returned to the region. The assignment of a Galaxy-Class starship is perhaps a sign of Starfleet's renewed commitment to the region as a new frontier to be explored, or perhaps, something else entirely. In early 2392, the USS Constitution-B was reassigned to the Talos Sector, with the USS Doyle-A, a newer Luna class ship, being assigned to explore the sector.

In late 2392, the Avalon Sector was given more attention within Starfleet Command. It was again the seat of a Sector Command, and a bit of the sector redesign in 2390 was undone. Again, the Ba'ku homeworld was part of the sector, although the majority of the Briar Patch was now located in the Borderlands. With a return to the altered sector, with the withdrawal of the Romulan Star Empire after the Hobus Supernova, with what little Romulan holdings remaining in the splinter faction of the Romulan Republic