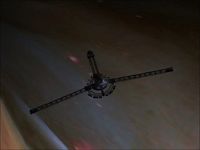 A small orbital research station studying both the planet below and the surrounding nebula, Sotra was built in 2389 as the last funded Starfleet venture into the region. It was resupplied by Civilians, contracted by the Federation, for over 2 years until the USS Constitution-B arrived in 2391. A series of incidents exposed the nature of the facility and just what went on there. The planet and surrounding space were host to energy beings that let a strange disease loose first aboard the station and then the USS Constitution-B. This led to a violent outbreak of hallucinations that turned some officers against one another and incapacitated a great many more. The situation was solved at the last minute by the sacrifice of Dr. Onil. A small Starfleet force was left behind on the station after the USS Constitution-B departed to monitor the situation.